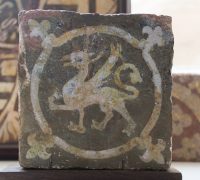 Painted and stained glass was only one component of the decoration of medieval churches and palaces. Others artworks included caved woodwork, painted walls and colourful floor tiles.

British CVMA Committee member, Professor Christopher Norton, will speak about some of these tiles at the Annual Clarendon Lecture on 19 October in Sarum College, Salisbury Cathedral Close. He is the foremost expert on the Wessex decorated floor tile industry, which commenced in the mid 13th century and whose traditions spread to the West Midlands, Wales and beyond by the early 1300s.

The Wessex Industry’s distinguishing characteristics can be traced directly to a pavement made for Henry III’s queen, Eleanor of Provence, at Clarendon Palace 1250–52 (Fig. 1). Tiles of identical or very similar design, with their familiar bird and lion motifs, were subsequently used in pavements at sites including Salisbury Cathedral, Winchester Cathedral, and a range of abbeys across Wiltshire, Somerset, Gloucestershire, Dorset and Hampshire.

Tickets will be available from The Salisbury Museum at a later date, at a cost of £10 per ticket, or £8 for Friends of Clarendon Palace and members of Salisbury Museum. The ticket price includes a wine reception from 6.30pm.