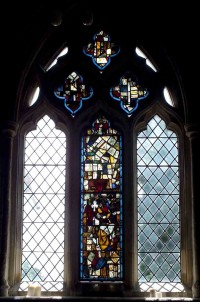 On Sunday 21 February, the congregation of St Mary and St Michael, Trumpington, discovered that the entire central lancet of their medieval fragment window had been stolen. The fragments are thought to be original to the church, having been discovered in a box in the vicarage by the late church warden Clare Bartlett. Following a fund-raising appeal, they were reinstalled in the church last June and rededicated last September. The police forensics team has been involved, and the church’s CCTV footage is being studied. It is known that the theft occurred after the church closed for the night on Saturday 20 February.

Analysis of the site has concluded that the panels were damaged when they were removed. A small piece of blue glass was found, as well as a piece of lead. Due to the age and fragility of the fragments, the panels had been installed in an internally ventilated protective-glazing system, positioned in front of the quarry window. Lead flashing was left hanging from the stone at the top of the light, suggesting the panels were wrenched out.

Stained-glass conservators are asked to be mindful of the theft in case those responsible attempt to have the panels repaired. If you have any information relevant to this theft, please contact the police immediately by telephoning 101. 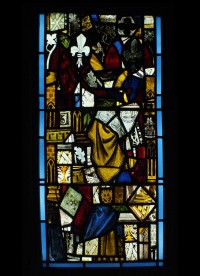 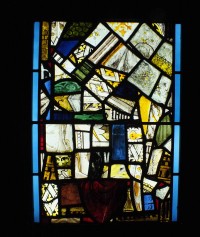 Fig. 3. Trumpington, St Mary and St Michael, the fragment window: panels 4b and 5b.

This entry was posted in Issue 97, News. Bookmark the permalink.