Call for Papers: The Rood 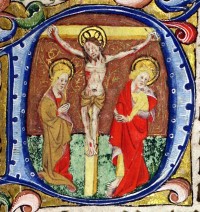 The rood – understood as the cross itself, and/or the image of Christ crucified – was central to the visual and devotional culture of medieval Christianity. By the late middle ages, a rood was present in monumental form, either painted or sculpted, at the east end of the nave of every church. Yet roods in numerous other forms could be found in ecclesiastical contexts: as images, in various sizes and media – in manuscript illumination, on textiles, and in stained glass. Images of the rood were also to be found within domestic, civic, and military contexts, from the bedroom to the battlefield.

Following recent scholarship that has focused on early medieval roods (the Sancta Crux/Halig Rod series, 2004–2010) and considered monumental roods on the Continent (Jacqueline Jung’s The Gothic Screen, 2013), this conference will bring together established academics, early-career and emerging scholars, to share new research and foster debate on the forms and functions of images of the rood in Britain and Ireland c.900 – c.1500. To this end, we invite proposals (max. 300 words) for papers of no longer than 30 minutes’ duration from scholars working within the disciplines of medieval art history, literature, history, archaeology and theology.

In considering the monumental church rood together with its counterparts in other media and contexts, this conference aims to reassess the complexities of the central image within the medieval Christian imagination.

Potential areas for discussion can include, but are not limited to, the rood in relation to materiality; sacred space; the liturgy; emotion/affect; conquest and crusade; the relationship between text and image; patronage, and pageantry/secular display.