Conservation of the Great South Window of Canterbury Cathedral has been completed, and the stained glass – some of the cathedral’s most important medieval panels, depicting the Ancestors of Christ – is being reinstalled.

….
The perpendicular Gothic window measures 55ft high and 24ft 9in. wide, and was originally built in 1430 using stone from Caen, France. The majority of the original stained glass was destroyed by iconoclasts in 1643–44, with just a few panels surviving in the tracery. The window was reglazed in the late seventeenth century, but the badly decayed masonry required extensive repair twice during the eighteenth century. The second occasion in 1792 saw the window completely dismantled and repaired. Following the restoration, it became home to twenty-two of the Ancestors of Christ – stained-glass panels depicting the genealogy of Christ that were originally created for and installed in the choir clerestory and Trinity Chapel. Started in about 1176 following a severe fire in 1174, and after the redesign and expansion of the cathedral to include a shrine for the recently canonized Becket, the series was completed around 1220. The Ancestors of Christ windows originally consisted of eighty-six figures, largely based on the list of names contained in the Gospel of St Luke, with additional names taken from the Gospel of St Matthew. Forty-three figures from the series – the largest known series of the genealogy of Christ in medieval art – now survive. 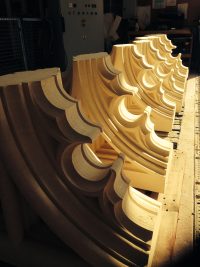 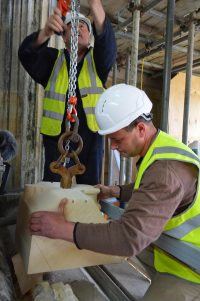 The Great South Window was repaired further during the nineteenth and twentieth centuries, and by the twenty-first century was a mix of materials, architectural styles and structural integrity. A stone falling from the window in June 2009 prompted intense investigation, and the cracks in the stone and its decay were put down to the combined effect of repairs undertaken in earlier centuries using ill-matched stone types, the impact of bell ringing, wartime ordnance damage, and the condition of a nearby monastic drain. After examination from interior and exterior scaffolding, which remained in place for seven years, it was agreed that the only means of securing the structure was to dismantle it and salvage and repair as much stone as possible; the cathedral’s masons have now carved 100 new stones for the lower part of the window [figs 1–2]. The intricate measurements for the stone had to be worked out in the traditional way, using squares, tape measures and pencils, as modern equipment, such as laser levels, could not be used on account of the density of the scaffolding.

One hundred and seventy-nine individual stained glass panels were removed from the window, most of which showed little or no deterioration since their last treatment in 1976. However, some showed evidence of new corrosion, and it was decided that the protective glazing system be redesigned in order to combat further corrosion. Two parallel glazing grooves were cut into the new stone to allow a ventilation gap (interspace) between the stained glass and protective panel. This allows air to flow freely and any condensation to drip down and escape through a small spout at the bottom of the glazing. In 2013–14, six of the Ancestor figures travelled to the J. Paul Getty Museum in Los Angeles and to The Metropolitan Museum of Art in New York before returning to the cathedral, where they and another eleven figures were exhibited in the chapter house. 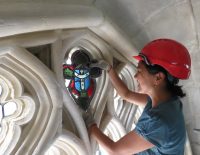 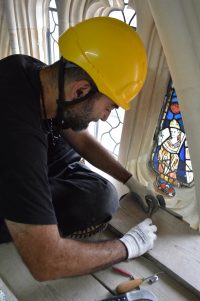 The stained glass is now being reinstalled [figs 3–4], and the window will be officially dedicated by the dean of Canterbury Cathedral, the Very Revd Dr Robert Willis, on 1 October 2016. Among those invited to the dedication will be those who contributed the £2.5 million towards the cost of rebuilding the window. Fund-raising was organised by the Canterbury Cathedral Trust – an independent charity established in 1974 to support the cathedral by raising funds from individuals, trusts and foundations, statutory bodies and corporate partners. The Canterbury Cathedral Trust is also organizing a fund-raising auction of the stone that could not be reused in the window on Saturday 24 September 2016. One hundred and forty lots of stone are to be auctioned from small pieces to large ornamental stones, and the money raised from the auction will go towards future conservation work ensuring the cathedral’s legacy. For more information see the cathedral’s website.