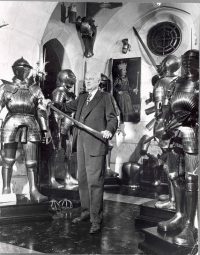 Fig. 1. John Woodman Higgins with armour and (indistinct) stained glass window behind him.

A recent auction of 34 copies of ‘medieval’ panels and border pieces made by the Zettler Glass Manufactory in Munich around the turn of the 19th/20th century saw many lots exceed their pre-sale estimates.

The firm of F.X. Zettler & Co. was founded in Munich by Franz Xavier Zettler (1841-1916) in 1870. It was one of two major Munich studios whose histories are intertwined. Zettler had initially set up a glass studio in 1862 for his father-in-law, Joseph Mayer, proprietor of Mayer & Co. of Munich, which specialised in Christian art. The Mayer and Zettler studios remained competitors for a number of years, but both firms were successful in gaining commissions from all over the world. Zettler’s firm achieved success at displays at the 1873 International Exhibition at Vienna, and in 1882 was appointed as the “Royal Bavarian Art Institute for Stained Glass” by King Ludwig II. The firm exported windows across Europe, North America, Canada, South America, Australia, and New Zealand. The Zettler firm ultimately merged with its rival Mayer & Co. in 1939, when Mayer & Co. bought the establishment.

The auction took place on June 28th at the London rooms of Thomas Del Mar Ltd, well-known specialists in arms and armour sales.

The panels and borders were made by Zettler as part of a travelling promotional exhibition that toured North America in the early 20th century, helping the firm to win commissions in the USA and Canada, including Newark’s Sacred Heart Basilica, Philadelphia’s National Shrine of St. Rita of Cascia, The Immaculate Conception Cathedral in Denver, and St. Helena’s Cathedral in Montana. 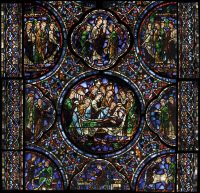 Fig. 2. Death (or Dormition) of the Virgin from Chartres Cathedral. 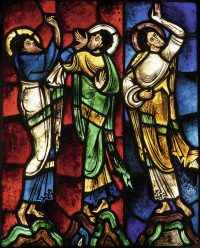 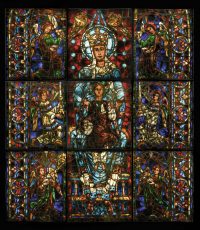 Two years before the firm closed its doors in the 1930s, it seems that the collection was sold to the Higgins Armory Museum in Worcester, Massachusetts, primarily for atmospheric background decoration. Formed by a local steel magnate, John Woodman Higgins (1874 – 1961), the museum housed a number of exceptional suits of armour and edged weapons but funding problems led to its closure in 2013 and the subsequent dispersal of its contents. While some parts of the collection were absorbed by the local Worcester Art Museum, others exhibits have since been sold off in a succession of sales orchestrated by Thomas Del Mar Ltd. [Fig. 1] 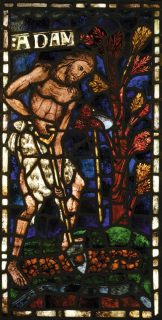 This entry was posted in Issue 113, News. Bookmark the permalink.