A very large second batch of images of stained glass from Essex has recently been uploaded to the CVMA Picture Archive, covering the glazing of forty-four churches I visited during 2014. Apart from the medieval glass, all glazing from the seventeenth century right through to the present has been photographed, catalogued and uploaded. Presently, stained glass from a total of 133 different Essex churches, a restaurant, and a private residence can be seen on the website. Coverage of the rest of the county will follow in due course. 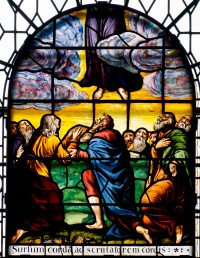 The Essex project was started by Kerry Ayres, who used the four Essex volumes issued by the Royal Commission on Historic Monuments (published in the early twentieth century) to identify 190 different locations of old stained glass; a further 6 locations have subsequently being found, and of these 196 locations

• 166 are churches, either used for regular worship on in the care of the Churches Conservation Trust (all bar 6 of which have been visited, with the remainder slated for the start of 2016);

• 3 are churches that have been demolished;

• 4 are churches that have been converted into private residences since the RCHM survey;

• 1 is a church that has been converted into business use;

• and 22 are other buildings, mostly large country houses.

Both the RCHM and Kerry’s survey used the old Essex county boundary, which meant that the county extended into what is now east London. ‘Former’ Essex churches have all been visited, and images of their stained glass will be found in the London section on the website. 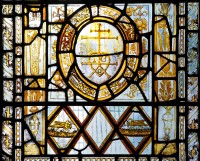 In an earlier article for Vidimus I quoted F. Sydney Eden, who wrote that while Essex is generally supposed to be below average in remains of old painted glass, it would not be difficult to illustrate all the styles of painted glass with fine examples from Essex alone. While much old glass in Essex consists of fragments found mainly in tracery lights – a lot still in situ – Eden’s bold statement can easily be supported with glass currently to be seen on the website, including

• late fourteenth-century Orders of Angels and the Coronation of the Virgin at Sheering;

• an almost complete mid-fifteenth-century Tree of Jesse at Margaretting;

• the remains of what would have been a spectacular early sixteenth-century east window at Stambourne;

• and imported sixteenth-century glass at Stisted and Prittlewell.

When the next batch of images has been uploaded, many more fine examples of glass from most centuries will be available. Now that nearly all the churches that possessed old stained glass during the 1920s have been visited, it is good to find that the majority of this glass survived the Second World War and has not been lost to acts of vandalism. In some cases where churches were demolished, such as at Manningtree and Wenden Lofts, old glass was removed and reset in windows at neighbouring churches. The RCHM gives tantalizing descriptions of old glass that may still be in some country houses of Essex. Let us hope that images of this material will eventually appear on the website and be appreciated by a wider audience. 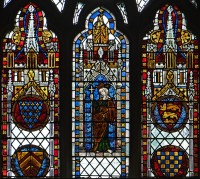 Essex has I believe over 800 Anglican churches, not to mention places of worship belonging to other denominations. There may well be other examples of interesting stained glass yet to be found. As this initial photographic survey of Essex reaches its conclusion, thanks must be given to the many people who opened up their churches, allowing me – often accompanied by a pair of rescued Chihuahuas – access to see and photograph the stained glass. One person in particular who deserves special mention is Lesley Vingoe, who arranged the access to churches across the whole of the south of Essex and east London. A further update will follow when the next batch of images are uploaded.