Tantalizing discoveries about the provenance of six panels German glass of c.1450 installed in the easternmost north and south nave windows of Thorney Abbey Church (Cambridgeshire), dedicated to St Mary and St Botolph, have been made after the glass was photographed during a visit by delegates attending the July 2015 Harlaxton Medieval Symposium [fig. 1].

The panels depict Christological subjects, and each has a strip of fragmented inscription below the figural scene. All six panels are ‘framed’ in mosaics of fragments of English late medieval stained glass. The panels in the easternmost north nave window show (west to east): the Mocking of Christ (prior to the Crucifixion), the Three Marys (on their way to the Sepulchre on the first Easter morning), and the Harrowing of Hell (when Christ rescues Adam and other souls from damnation). Those in the opposite south nave window (again east to west) depict the Denial of St Peter, the Supper at Emmaus, and the Pietà, with Mary cradling the dead body of her son [figs 2–7]. 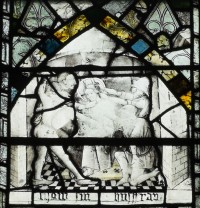 Fig. 2. The Mocking of Christ. 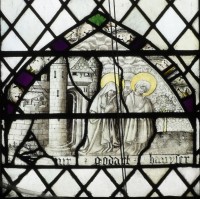 Fig. 3. The Three Marys on their way to the Sepulchre. 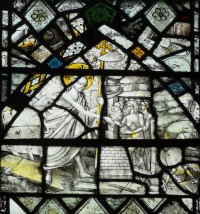 Fig. 4. The Harrowing of Hell.

There has always been uncertainty about the where the panels originally came from, and when, and by whom, the windows were installed at Thorney. Some of these questions were addressed in 1973 by Heinz Oettli, a student of German literature who was based at Cambridge University. By focusing on the inscriptions, he was able to show that the glass was German, not Flemish or Swiss as some earlier experts had opined. He also reported that the then vicar believed that the panels had been installed in the church in 1638, when the western end of the nave of the former abbey was restored by the 4th earl of Bedford, for the benefit of French and Dutch immigrants who had settled in the area as part of an ambitious campaign to reclaim water-logged fen lands [fig. 8]. Fig. 6. The Supper at Emmaus, with the risen Christ sitting at a table with two unsuspecting disciples. After accepting the 1638 date and extracting the name ‘Godart Hauyser’ from the inscriptions, Oettli then suggested that the panels may have been made in Cologne for a well-documented Hanseatic merchant of that name who died c.1494. He also postulated that, if the installation date was correct, the glass may have been bought by the 4th earl of Bedford in the aftermath of the despoliation of the Hanseatic Steelyard in London. This had been the main trading depot of the League in England during the Middle Ages until Elizabeth I ordered its closure in 1598. In the aftermath of this decision the site was looted, and stained-glass windows from the chapel reportedly stolen.

While much is owed to Oettli for his pioneering work on the inscriptions, it is now clear that he was misled about the history of the glass, albeit unintentionally. If the claims about the date when the glass was given to the church were accurate, 1638 would have been an extremely early moment for the purchase and gift of foreign glass to an English church. As regular readers will know, the purchase of foreign glass by English collectors appears to have become fashionable much later than 1638 –from the mid-eighteenth-century onwards, and particularly in the first forty years of the nineteenth century, when large amounts of Continental glass became available on the international art market following the Napoleonic invasions of modern-day Belgium and the German Rhinelands and the secularization of the monasteries. Moreover, some of these imports were often framed by English glaziers in mosaics such as can be seen at Thorney. Fig. 9. ‘Christ expelling the traders from the temple’, now in the Suermondt Museum, Aachen, Germany. One of the great advantages of the international Corpus Vitrearum is that stained glass historians throughout the world meet regularly, share information and help one another. So it has proved with Thorney. After photographs of the panels were sent to the German CVMA in Freiburg, Dr. Hartmut Scholz recognized them as belonging to the same series as another panel, ‘Christ expelling the traders from the temple’, which was listed in the auction catalogue of the Hirn/Schieffer collection in 1824 before passing into the collection of Baronesse Liebig at Gondorf Castle and eventually into its current home at the Suermondt Museum in Aachen [fig. 9]. Fig. 11. The east window of Thorney Abbey Church, with visitors from the Harlaxton Symposium.

The Hirn/Schieffer collection, which included panels from the Cistercian Abbey at Altenberg, was formed in the aftermath of the Napoleonic invasions. The inclusion of a panel from the same set of those at Thorney suggests that all the panels came onto the art market at around the same time and were subsequently dispersed. A date of installation at Thorney sometime around 1840–41, when the well-known Victorian ecclesiastical architect Edward Blore (1787–1879) restored the church for Francis Russell, the 7th duke of Bedford KG, PC (13 May 1788 – 14 May 1861), now seems far more likely than 1638 (fig. 10). Unfortunately, it has not yet been possible to determine the original location of the Thorney panels.

Apart from the German glass discussed above, the church also contains various heraldic shields, some of pre-Reformation date, known to have been introduced in 1840–41. The second, third, and fourth windows on the north have the following shields of arms respectively: Russell, early 19th century; John of Gaunt, late 14th century; and Henry VIII impaling Katharine of Aragon, first half of the 16th century. The second window on the south has the royal arms, of early 16th-century date. The church also features a large nineteenth-century east window scheme that copies scenes from the St Thomas Becket miracle windows in Canterbury Cathedral [fig. 11].

Thorney Abbey was founded in the 970s and substantially rebuilt in later centuries. At its peak, it was one of the five great Benedictine monasteries in the Fenlands (the others being Peterborough, Ely, Croyland and Ramsey), and the abbey church was about the same size as that at Peterborough. Extensive building work in the early fourteenth century during the abbacy of William Clopton (1305–23) saw stained glass fitted in the Lady Chapel and a carved and painted Tree of Jesse (presumably in wood) installed over the altar (Cambridge University Library, Additional MS 3020–21, the ‘Red Book of Thorney’, fols. 459–61). Sadly most of these riches were lost when Thorney was largely demolished after the Dissolution in 1539. Much of its building stone was sent to Cambridge, where it was used in the construction of the new chapel at Corpus Christi College. Excavations undertaken by archaeologists from the University of Leicester in 2002 in an area slightly to the north of the abbey church and possibly within the abbey’s outer court made several exciting discoveries relating both to pre-Reformation glazing in the monastery and to its post-Dissolution plundering.

The key find was a large number of broken fragments of high-quality thirteenth- and fourteenth-century painted glass, including intricate designs of very high quality in an area immediately surrounding a re-used architectural fragment, possibly a pillar base, which had been converted into a lead recycling hearth at the time of the Dissolution. The glass included elaborate border fragments with foliate and canopy designs and several pieces that, when joined, showed part of a heraldic motif depicting a lion passant. Apart from the glass, the archaeologists also found large amounts of lead window cames and other lead waste in the same area, as well as ashy spreads and areas of scorching. All the evidence pointed to the systematic destruction of at least some decorative windows in order to remove and recycle their lead.