Images of St Edmund (d. AD 869), king and martyr, survive in a number of English medieval stained glass windows, particularly in the eastern counties of Norfolk and Suffolk. In early May it was announced that a voluntary charity, The Abbey of St Edmund Heritage Partnership, intends to try and ‘put bones if not flesh’ on these images by excavating some tennis courts built over a graveyard of the former Benedictine Abbey in the hope of finding the saint’s lost remains (relics). It would be a ‘miracle’ if they did so. [fig.1]

Before the murder of Archbishop Thomas Becket in 1170, St Edmund’s shrine at Bury St Edmund (Suffolk) was one of the most visited pilgrimage sites in England. It was destroyed during the Reformation after which, according to local legend, his body was placed in an iron chest and buried by monks somewhere in the precincts of the Abbey. 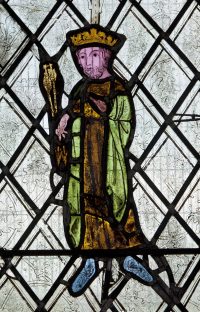 St Edmund was an Anglo-Saxon king of East Anglia. In AD 869 he was executed by Viking raiders after refusing to renounce his Christian beliefs. According to the Passio Sancti Eadmundi written by Abbo of Fleury c. 985-987, he was tied to a tree and shot with arrows (sagittation) until he resembled ‘a prickly hedgehog or a thistle fretted with spines’. He was then beheaded and his head flung into brambles. When his followers searched for his body, they heard the head crying, ‘Here, Here’. It was guarded by a wolf who had been dissuaded from his natural proclivity to eat the head by virtue of the king’s sanctity. After the discovery his head and body were miraculously reunited. His attributes in art include arrows and a wolf.

St Edmund was a particular favourite of English kings and was regarded as the patron saint of England until he was supplanted by St George.

Good images of the saint in stained glass can be seen at Saxlingham Nethergate (Norfolk), Long Melford (Suffolk), and Edworth (Beds). (Fig. 2)

This entry was posted in Issue 110, News. Bookmark the permalink.