In April 2021, the British Museum will host the first ever major UK exhibition on the life, death and legacy of Thomas Becket, whose brutal murder inside Canterbury Cathedral in 1170 shook the Middle Ages. Its centrepiece will be an entire thirteenth-century window from Canterbury Cathedral (Fig. 1), depicting miracles attributed to Thomas.

Thomas Becket: murder and the making of a saint (22 April – 22 August 2021) will chart over 500 years of history, from Thomas Becket’s remarkable rise from ordinary beginnings to one of the most powerful figures in England, through to his enduring but divisive legacy in the centuries after his death. The story will be told through an array of over 100 stunning objects brought together for the first time, including rare loans from across the UK and Europe.

Originally due to open in October 2020 but delayed by the coronavirus pandemic, the exhibition marks 850 years since the former Archbishop of Canterbury was killed on 29 December 1170 in his own cathedral. The murder was possibly on the orders of his bitter rival and former friend King Henry II. News of Becket’s gruesome death sent shockwaves across Europe and is considered one of the most scandalous acts of sacrilege in English history. Within days, miracles were being attributed to Becket, many connected to the healing power of his spilt blood, which lead to his canonisation as a saint by the Pope. His martyrdom had a profound impact on the power dynamics between Church and State for hundreds of years, culminating in King Henry VIII ordering the obliteration of Becket’s legacy in 1538, calling him a traitor to the crown. Becket’s role as a key figure in major moments of European history will be traced throughout the show.

Lloyd de Beer, who co-curated the exhibition with Naomi Speakman, said “The violent death of Thomas Becket is the ultimate true crime story. It’s a real-life tale as dramatic as Game of Thrones and we’re going to lead visitors through every twist and turn of this remarkable plot. There’s drama, fame, royalty, power, envy, retribution, and ultimately a brutal murder that shocked Europe.”

The exhibition’s centrepiece will be the extraordinary loan of an entire six-metre tall stained-glass window from Canterbury Cathedral. It is one of the surviving famed Miracle Windows which were made in the early 1200s to surround Becket’s now-lost shrine in the Cathedral’s Trinity Chapel. This is the first time one of these windows has ever been lent, and the first time the glass has ever left the Cathedral precinct, since their creation 800 years ago. 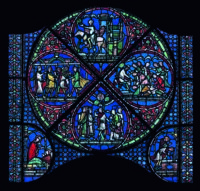 Fig. 2. Miracle window, n3, Canterbury Cathedral, early 1200s. (Image © The Chapter, Canterbury Cathedral) These six panels tell the sensational story of Eilward of Westoning, a peasant who is blinded and castrated as a punishment for stealing. After praying to St Thomas, Eilward’s blindness is healed and his testicles miraculously grow back. 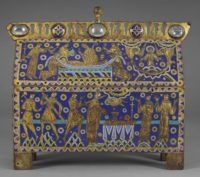 The Miracle Windows, of which seven survive from an original series of twelve, tell the evocative stories of miracles attributed to Becket in the three years following his death. They demonstrate his remarkable transformation from a London-born merchant’s son into the renowned miracle worker known as St Thomas of Canterbury, who is still revered by Christians today.

The window that will feature in the exhibition is an exceptional example of medieval stained glass narrative design and artistry. The miracle stories it depicts include the healing of eyesight and the replacement of lost genitals (Fig. 2), with the latter being the earliest known depiction of castration in medieval art. New research, recently carried out due to its removal for study prior to the exhibition, has revealed that some of the panels have been in the wrong order for centuries. They were probably mixed up during a hasty rearrangement in the 1660s and the errors were discovered after close inspection of individual pieces under a microscope. When the window is shown at the British Museum, it will be rearranged in the correct narrative order, and this will be the first time in over 350 years that visitors will be able to view these panels as they were made to be seen. It will also be the very first time the window can be seen up-close at eye-level.

Leonie Seliger, Director of Stained Glass Conservation at Canterbury Cathedral, said: “The Miracle Windows are medieval versions of graphic novels illustrating the experiences of ordinary people. They greeted the pilgrims at the culmination of their journey to Becket’s shrine with images that would be reassuring and uplifting. The window that will be shown at the British Museum is only one of seven that remain, and they are one of Canterbury Cathedral’s greatest treasures.”

Becket’s story will also be brought to life through an array of objects including precious reliquaries, jewellery, pilgrims’ badges and sculpture from the British Museum collection. Spectacular loans, which make up almost half of the objects on display, include objects which may have been owned by Becket himself, such as manuscripts from Trinity College and Corpus Christi College, Cambridge that he is thought to have commissioned or was given. There will also be a single surviving wax impression made from Becket’s personal seal matrix – lent by the National Archives – providing a tantalising glimpse of his personality. An illustrated manuscript containing John of Salisbury’s Life of St Thomas Becket from the British Library, will show visitors one of the earliest known representations of the murder.