‘Where the Buffalo Roam’, by award-winning photojournalist M.J. Alexander, reflects the tumultuous history of the American frontier, as memorialised in the windows of its churches and chapels.

For centuries, the North American Plains were home to indigenous tribes that travelled with the seasons and the bison herds. The frontier was largely unsettled, and unexplored by outsiders. In 1803, rights to the vast lands between the Rocky Mountains and the Mississippi River were acquired from France by the newly formed United States as part of the Louisiana Purchase. 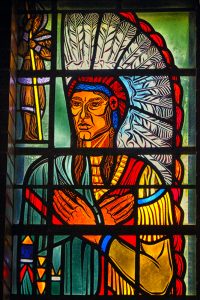 Fig. 1. Detail from The Indian Window in the Chapel at the University of Central Oklahoma, designed by Ray Gilliland, a member of the Delaware Tribe. The eight-foot-tall figure was modelled on Choctaw tribal member Benjamin Beames, a star of the school’s 1942 football team, and inspired by John Oxenham’s hymn, In Christ There Is No East or West. UCO students, many of them returning veterans of World War II, cut the window’s patterns and painted and fired the glass, which was leaded by Frei Studio of Saint Louis, Missouri.

The area north of Texas and south of Kansas was reserved as Indian Territory. Beginning in the 1830s, under treaties that made way for white settlers, the region was designated as a new homeland for Native Americans. Tribes from the Southeast were forcibly marched there from their ancestral homes on routes that became known as The Trail of Tears. In 1889, after 50 years of relocations and the establishment of sovereign Indian Nations, the territory was opened to Land Runs for non-Natives. The population would soon surpass 1 million, and the territory joined the Union in 1907. It became the 46th state under the name of Oklahoma, from the Choctaw words for “red people.”

In the wake of statehood, several churches commissioned stained glass windows with portrayals of Native Americans, fat bison, rich crops and tall oil wells. In the years to come, new windows would commemorate the introduction of Christianity by 19th-century missionaries; negotiations between tribal chiefs and wily top-hatted, treaty-wielding federal agents; streams of settlers in covered wagons in an exodus to the promised land; and tributes to Native and Oklahoma-born martyrs and saints.

The exhibition features windows from European and American glassmakers, offering a variety of artistic styles and vantage points.

M.J. Alexander chronicles the people and places of the Great Plains and American West. Her work has been published by The New York Times and Time magazine, and featured in more than two dozen solo shows, including a 2018 European debut at London’s Crypt Gallery. A veteran journalist, playwright, librettist and lyricist, she is author and illustrator of two award-winning books of fine-art portraiture. The International Photography Hall of Fame describes her as “combining the vision of an artist with the skills of a storyteller.” She was inducted into the Oklahoma Journalism Hall of Fame in 2019.

The Stained Glass Museum is housed in the south triforium of Ely Cathedral, and the exhibition can be found in the main gallery. Entrance is included in the Museum’s ticket price. For further information about this exhibition please contact 01353 660347 or see the Museum’s website.

This entry was posted in Issue 128, News. Bookmark the permalink.