An exciting exhibition currently running at the Getty Museum in Los Angeles, USA, focuses on how one of the three “Magi from the East” was depicted in European medieval and renaissance art. As windows across England and continental Europe frequently included images of the three magi in the Middle Ages, usually in the context, of scenes of the nativity, we thought a summation of the exhibition’s themes, illustrated with examples from stained glass, might be of interest to the readers of Vidimus. [Fig 1]

First, some background. According to the Gospel of St Matthew, wise men (magi) from the east followed a brilliant star to find the Christ child in Bethlehem and present him with gifts of gold, frankincense and myrrh. As there were three gifts, it has traditionally been assumed that there were three men. Although not specifically identified in the Bible, the medieval church referred to these men as Balthazar, Caspar (sometimes Gasper) and Melchior. By 500AD they were being described as kings, based on Old Testament prophecies, see Isaiah 60:3, Psalm 68:29, and Psalm 72:10. The men were also said to come from the three then-known continents of the world: Europe, Asia, and Africa. Sometimes the magi/kings were deployed to represent the three ages of life – youth, maturity and old age. A fresco by Giotto painted 1305 in the Scrovegni Chapel, in Padua, central Italy, shows Caspar as old, Melchior middle-aged, and Balthazar as a young man, possibly alluding to Africa being the youngest of the three continents. [Fig 2] 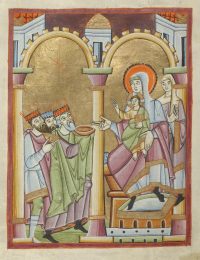 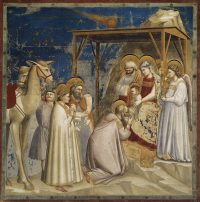 Fig. 2: Adoration of the Magi, Scrovegni Chapel, Padua, by Giotto.

Balthazar: A Black African King in Medieval and Renaissance Art explores how and why the depiction of the youngest magi/king evolved and changed from a European white person in early me-dieval art to an obviously black African person in the later Middle Ages. It also contrasts the juxtaposition of this seemingly positive image of a black African with the brutal enslavement of non-Christian African peoples by the Portuguese and other Europeans from the 1480s onwards.

The exhibition begins with a Romanesque manuscript miniature showing all three magi/kings as white. Painted in Regensburg, Germany, about 1030-40, the scene depicts them as virtually identical with only Caspar, the eldest, distinguished by his grey beard and slightly longer robes. [Fig 3]

Similar conventions can be seen in stained glass of the period, as in a late 12th century window at Can-terbury Cathedral; an Infancy of Christ scene from Austria, painted c. 1390 and an important survival from the 1460s at East Harling, Norfolk, England. [Figs 4, 5, 6]

According to the curators of the exhibition, such uniformity began to crumble from the 14th century onwards. A wall painting of about 1360 in the Emmaus monastery in Prague shows one of the three kings with an unquestionably darker face than the others but scholars are uncertain whether this is the oldest representation of a black magi/king or a modern repainting during a 20th century restoration programme. There are no such doubts, however, about the growing number of 15th/16th century artists, sculptors and glaziers who depicted Balthazar as either black, or who distinguished him from the other magi by his flamboyant clothes, such as a turban or a leopard-pelt headdress. 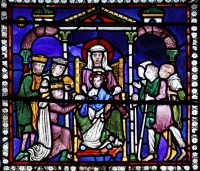 Fig 5: The Adoration of the Magi from Seven Scenes from the Life of Christ, Ebreichsdorf, Lower Austria, c. 1390 © The Cloisters Collection, 1986, The Metropolitan Museum, New York. 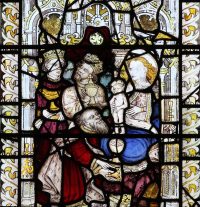 The curators suggest that increased trade with African states stimulated the change. Commerce in gold brought inhabitants of both continents into frequent contact. Black African soldiers served in the courts of medieval European rulers and as servants in wealthy households. Diplomacy offered yet another point of contact. In the fifteenth century, Ethiopian rulers sent church delegations to Italy in an attempt to forge alliances, both religious and military with Rome. 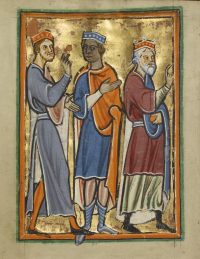 Although the appearance of the black king may have been partly inspired by real Africans living in Europe, there may have been other reasons for the transition. The black king gave high status artists an opportunity to explore European ideas of the exotic and to depict a lavishly dressed figure in a religious scene: an exciting innovation. The black king also symbolised the idea that Christianity appealed to all humanity, even the most foreign and remote people. The blackness of his skin showed that he was from a distant land, although even there, people had accepted the truth of Christ’s message.

An intriguing manuscript illustration in the exhibition provides a tangible case study for the emerging interest in depicting Balthazar as black. The image, The Magi Approaching Herod, from an illustrated Life of Christ with devotional supplements (text in Latin and English), painted in East Anglia (possibly Norfolk), England, about 1190 – 1200, was later modified about 1480-90 by an unknown artist who revisited Balthazar’s face and added a brown wash in several places. Such changes may well reveal the evolv-ing world-views of the book’s owners. The curators ask if the increased number of Black Africans in England at this time might have prompted the artist to revise the figure of Balthazar in the older manuscript. [Fig 7]

Such changes were not confined to panel paintings, manuscripts and sculpture. They can also be found in 16th stained glass panels. One c.1500 German window of the Adoration of the Magi in the Victoria and Albert Museum (London) shows Balazathar as black. A window depicting the same scene by the French artist Jean Chastellain made around 1529 for the Temple Church, in Paris and now in the The Philadelphia Museum of Art shows him as black and wearing a turban. The early sixteenth-century windows at King’s College, Cambridge (England), depict him as clearly African both in facial appearance and in dress. [Figs 8, 9, 10] 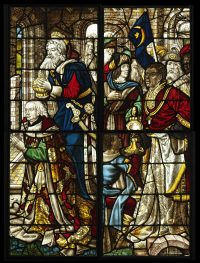 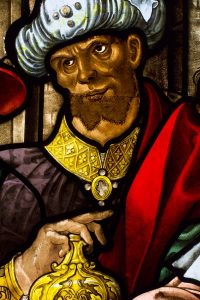 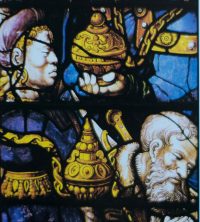 Balthazar: A Black African King in Medieval and Renaissance Art is open at the Getty Museum until February 17, 2020. Admission is free. For further details visit: https://www.getty.edu/art/exhibitions/balthazar/

Thanks: The above was partly compiled from notes produced for the Getty exhibition and separately, by The Victoria and Albert Museum. Our thanks to both.