Fears about the Burrell

Fears have been raised about how the Burrell Collection’s outstanding collection of medieval stained glass will be displayed after a planned redesign of the famous Glasgow-based museum (fig.1).

The museum has been closed to the public since 2016 for a major refurbishment and will remain so until 2020.

Architects responsible for the original building, which opened in 1984, have voiced misgivings that parts of a proposed £66 million refit and extension aimed at reversing a decline in visitor numbers will ‘mess around’ with the harmony and integrity of the original building. The changes include ‘improved cafe and retail opportunities’, a new ‘learning space’ and the creation of an internal ‘hub’. 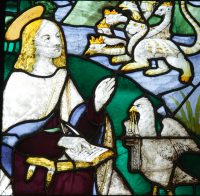 Professor Richard Marks, the first Keeper of the Collection and a leading expert on medieval stained glass, has pointed out that the proposed destruction of the present entrance hall would remove the only area in the museum suitable for the display of large stained glass panels. He has also said that he is concerned that, ‘the planned creation of a new entrance will involve the destruction of the reconstituted Hutton Castle dining room, not only ruining the symmetry of the trio of rooms (from Hutton Castle – Sir William’s home until his death in 1958; the others rooms are the Hall and the Drawing Room) )but also abrogate Sir William’s stipulation (at the time he gave his collection to the city of Glasgow) that all three rooms should be incorporated with their fittings and furnishings’.

There are more than 600 panels of stained glass in the Burrell Collection, ranging from complete windows down to small roundels. The collection is particularly strong in northern European glass of the 15th and 16th centuries and includes a panel from Abbot Suger’s glazing of St Denis in Paris, painted around 1140-45 (fig.2).