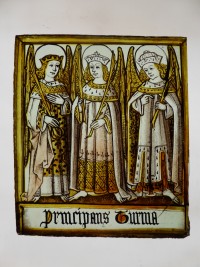 In November 2015, the Stained Glass Museum purchased two rare medieval stained-glass panels depicting the Virtues and Principalities from a sale at Bonhams in London [Figs 1–2]. These late fifteenth-century panels were purchased with the help of the Arts Council England/Victoria and Albert Museum Purchase Grant Fund and the Art Fund, and form a significant addition to the museum’s collection of medieval stained glass. On stylistic grounds, the panels appear to be of English origin, although their exact provenance is unknown. The panels came from a window in Ulverscroft Manor, a large house in Markfield (Leicestershire) built for Thomas Pares, who was living in the manor by 1836. It is not known when the glass was installed, or where it came from. The estate remained in the Pares family until 1944, after which it passed to various owners before being purchased by David Clarke in 1990. The property is now owned by the Shuttlewood Clarke Foundation, a charity that offers support to the elderly and adults of all ages with disabilities in the Leicestershire area.

Now in the collection of the Stained Glass Museum, the angel panels have been placed on permanent display within the medieval section of the museum’s main gallery, where they can be seen alongside a number of small-scale English silver-stain roundels and unipartite panels from the fifteenth century. Visitors are able to view the panels at unusually close quarters, so that the detail can be appreciated and enjoyed.

The panels were probably originally part of a set depicting the nine orders of angels, a popular subject in medieval art and literature. Around the beginning of the sixth century, the theologian Pseudo-Dionysius wrote a treatise entitled De Coelesti Hierarchia (‘Concerning the Celestial Hierarchy’), which compiled a list of different types of angels. He identified nine orders in total, divided into three hierarchies with different functions, and his account was largely accepted by Jacobus de Voragine, author of the Legenda Aurea (‘The Golden Legend’) written c.1260 (see Vidimus 35). These written accounts inspired many visual depictions of the orders of the angels in a variety of media, including stained glass.

Of the two panels acquired by the Stained Glass Museum, the first depicts Virtues, a group of angels from the second most important hierarchy of angels (the hyperphania), who were often associated with miracles. The second panel depicts Principalities, a group of angels from the lowest hierarchical group of angels (the hypophania), who it was believed looked after the provinces of mankind. Both panels depict a group of three standing angels dressed in white robes with two golden wings, golden hair, and white haloes. Each group is identified by a Latin inscription below the figures that describes the characteristic of the order. The three Virtues are identified by the inscription ‘virtus uranica’ (‘heavenly virtue’) and wear diadems and dalmatic clerical robes and albs with apparels. In this rare depiction, all the figures are shown holding open books representing the knowledge of God, a sceptre, and, curiously, what appear to be urine flasks. One of the three Virtues holds up his flask to inspect it. The Principalities, identified by the inscription ‘principans turma’ (‘ruling troop’), are shown bearing branches of lilies, in accordance with Greek tradition (see Jameson 1850), instead of the more typical sword or sceptre. They wear crowns, and long-ermine trimmed robes, representing their role in looking after the lands of kings, princes and bishops (see Morgan 2004). 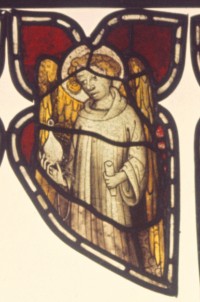 The presence of the urine flask is highly unusual, although an unidentified angel holding a similar flask and a scroll can be seen in fifteenth-century stained glass in tracery glass at St Lawrence’s Church, Harpley (Norfolk, see Woodforde 1950) [Fig. 3]. The only other known medieval English depictions of angels holding such flasks are in other media, for example, a painted depiction of a Principality in the rood screen at Barton Turf, Norfolk, c.1440 (Morgan 2004) and a sculptural depiction in the Beauchamp Chapel, Warwick, c.1443–47 (Eichberg 1998, Marks 2010). Virtues are far more commonly shown bearing a pyx, chrismatory or censer. As urine flasks were typically associated with the medical profession in the Middle Ages, their presence in these panels may indicate the powers of angels and their ability to perform healing miracles.

The inscriptions that accompany the angelic figures appear to derive from medieval liturgical manuscripts related to the feast of Archangel Michael, celebrated on 29 September. The inscriptions appear in an eleventh-century manuscript from Moissac, France, in the Department of Manuscripts at the Bibliothèque nationale de France, Paris (N. A. Lat. 1871, see Iversen 1996, p. 98). In this text, the nine orders of the angels are associated with epithets: ‘plebs angelica’ (‘angelic multitude’); ‘phalanx archangelica’ (‘archangelic phalanx’); ‘principans turma’ (‘ruling troop’); ‘virtus uranica’ (‘heavenly virtue’); ‘potestas almiphona’ (‘propitiously singing power’); ‘dominantia numina’ (‘dominating powers’); ‘divina subsellia’ (‘divine tribunes’); ‘Cherubim atherea’ (‘ethereal Cherubim’); and ‘Seraphim ignicoma’ (‘fiery-haired Seraphim’). All these descriptive phrases end in the -a vowel, rhyming with a final ‘Alleluia’ in the sequence. Although examples of visual representations of the Orders of the Angels with accompanying texts have been recorded, the most important examples have now been lost – the painted rood beam at Coventry Cathedral was destroyed during the Second World War, and the inscriptions accompanying the Orders of the Angels in stained glass at All Saints North Street, York, are now mostly lost – demonstrating the significance of the surviving complete texts on these panels. The silver-stain border around each group of angels, and their accompanying tituli, may also relate directly to an illustrated manuscript.

The Orders of the Angels were a popular subject in medieval illuminated manuscripts, panel painting, wall-painting, sculpture, and stained glass (see Eichberg 1998), reflecting their importance in medieval liturgy and devotion. Yet only five complete (or almost complete) fifteenth-century depictions of the Orders of the Angels in stained glass survive in situ in England, many of which are fragmented or heavily restored. Examples can be seen in York at All Saints Church, St Michael’s Spurriergate, and St Martin Coney Street; in Oxford in New College Chapel; in Cornwall at St Neot’s; and at Great Malvern Priory (Morgan 2004). The two panels now in the collection of the Stained Glass Museum represent a now-rare depiction of a popular subject, making them of significant historical interest.

Stylistically, the angels are comparable to other small-scale English panels executed in paint and silver stain. Comparable fifteenth-century examples include the angels in situ in tracery lights at the Church of St Mary and St Clement, Clavering (Essex) [Fig. 4]; and the series of Labours of the Month roundels (dated 1445–75) from Cassiobury Park (Hertfordshire) now in the collection of the Victoria & Albert Museum (acc. nos. C.123-1923 and C.126-1923, see Williamson 2003).

The paintwork on both panels is very detailed and highly skilled, indicating that this may be the work of a prominent English glass-painting workshop. The techniques employed include stickwork, the use of a stylus to scrape away areas of paint to produce highlights, as seen in the hems and other details on the angels’ robes and the picking out of the blades of grass on the ground on which the angels stand. There is also some smear shading (on both the front and reverse of the panels) and stipple-shading, used to create depth and texture in the garments. Yellow-coloured silver stain is used to great effect in colouring the wings, golden hair, crowns, and details on the robes, enlivening the whole image.

It is worth commenting on the exceptional condition of the panels. In spite of being over 500 years old, the original paint and silver stain remains intact, and the panels show little to no signs of corrosion. On close examination the panel depicting the Virtues has suffered more paint loss than that of the Principalities; although the inscription and figures here are still very legible, some paint loss has led to the image’s appearing slightly faded. The Principalities panel is far more legible, but it appears that the paintwork may have been touched up at a later date by another hand to enhance the clarity of the image. It was also observed when the outer leads were removed that both panels had been cut down on one of the vertical sides, presumably to fit a window opening at a later date.

More research needs to be done on the possible manuscript sources for these depictions, and the historic and architectural context of the panels. If any Vidimus readers have information or ideas that may help us to understand and interpret these new acquisitions, the museum would be delighted to hear from you. Please contact the curator Dr Jasmine Allen ([email protected]).