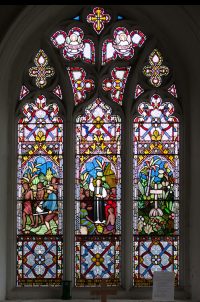 2020 also sees the 200th anniversary of the birth of Frederick Preedy (1820-1898), a prolific nineteenth-century stained glass designer and church architect who is thought to have been responsible for about four hundred figurative windows over a thirty-four year period. Major commissions included work in Worcester Cathedral, Gloucester Cathedral, Lincoln Cathedral and Ely Cathedral.

Preedy was born in Offenham near Evesham in Worcestershire, the son of a prominent local hosier. He trained as an architect in Worcester with the local firm of Harvey Eginton before setting up his own architectural practice in the same city in 1849. In 1852 he was elected a member of the Ecclesiological Society which championed gothic architecture; particularly the early 14th century early decorated style and many of his windows often imitated medieval designs.

For his early churches he commissioned stained glass windows from George Rogers, a stained glass painter in Worcester, but after a falling out between the pair in 1853 over the colouring of a window in Worcester Cathedral in memory of Adelaide of Saxe-Meiningen, the Queen consort of William IV, (Preedy thought it had an unpleasant purple tone) he learned how to make his own windows: a decision which set him apart from his professional contemporaries. According to Kearney (see below) he was the only architect of the Gothic Revival to combine the profession of architect with the manufacture of stained glass, an art for which he possessed a genuine gift.

The first window that he both designed and made dates to c.1854 and was produced for All Saints, Church Lench (Worcs.). As his business grew, Preedy was praised for his window designs and won commissions from leading gothic revival architects of the day such as William Butterfield (1814-1900) and Samuel Teulon (1812-1873).

Fig. 2: Detail of Bishop Mackenzie’s grave with with the cross placed there by David Livingstone in 1863

Some of his best windows can be seen at Storridge, Herefordshire, 1856; Claverley, Shropshire, 1858; Bamford, Derbyshire, 1860; Old Hunstanton, Norfolk, 1867 and Fladbury, Worcestershire, where the windows date from c.1856 to c.1882. In 1868 he designed and supplied a three light window commemorating the life and death in Africa of Bishop Charles Mackenzie (1825–62), a friend of the colonial explorer and Christian missionary, Dr David Livingstone (1813-1873). Both men were passionate opponents of the East African Arab slave trade. [Figs 1, 2]

Ill-health forced Preedy’s retirement in 1886 and he died in 1898. He was buried at Foxham (Wilts) with his wife and father-in-law. Following his death a memorial was erected to him in the church of St John the Baptist, Fladbury, Worcestershire. This also remembers his wife Mary (1831 – 1889), and daughter Alice Mary (1860 – 1899).

In 2012 a ‘Preedy Trail was launched by Evesham town council and the Evesham Market Town Partnership, see: https://www.visitevesham.co.uk/about-vale/preedy-trail/

Albums of Preedy glass can be accessed here.

Further reading on Preedy, his glass and career includes: