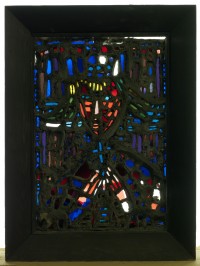 We are sad to report the death of Geoffrey Clarke RA (1924–2014), an artist and sculptor, whose work included glass and metalwork for the new Coventry Cathedral. Clarke worked in a wide range of media throughout his long career, and despite being known primarily for his work in sculpture, his stained glass constitutes a remarkable achievement, being experimental and pioneering whilst at the same time maintaining a traditional knowledge base and hand-crafted approach.

Born in Darley Dale (Derbyshire) in 1924, Clarke attended Preston School of Art in 1940–41, and then in 1941–42 Manchester School of Art, where he met his wife, Bill. After serving in the RAF during the Second World War, he continued his studies at Lancaster and Morcambe School of Arts, where he won a silver college medal.

Although his original intention was to study graphic design and not stained glass, his natural ability became apparent during his time at the Royal College of Art, where he studied under Lawrence Lee between 1948 and 1952. Early work from the late 1940s demonstrates Clarke’s fondness for experimentation, where glass was combined with different media – such as plaster – in order to relieve what was deemed the ‘uninteresting surface’ of traditional leaded glass. This style could be seen as an early version of windows, which, though popular in Continental Europe, did not become widely adopted in England until a number of years later. Following on from this stage, Clarke experimented with combining metal and glass, creating more sculptural pieces that likely contributed to his later work in cast metals.

Between 1951 and 1969, Clarke produced ten leaded windows for churches. Judith LeGrove has described them as demonstrating ‘the freedom with which he responded to the potential of the medium’. She characterizes their vitality as being due to their inventive design, which filled the whole window across the mullions and tracery; the use of leading to reinforce the designs; his interesting use of paint; and his choices of glass in a rich secondary colour palette.

In 1952, Clarke exhibited at the Venice Biennale and Gimpel Fils in London, and won a gold medal at the Royal College. In the same year Basil Spence enlisted the RA with the task of choosing glass artists to design the new windows for the bombed cathedral at Coventry. In 1956, Clarke – along with Keith New and Lawrence Lee – began work on the windows. They created three each, with Clarke’s including those titled ‘Wisdom of Man’, ‘Wisdom of God’ and ‘Man in Maturity’. He also made a number of sculptures, including the high altar cross, candlesticks, and the famous Flying Cross.

Clarke was elected to the Royal Academy in 1975, and had a successful career in England and abroad. His work can be found in a number of ecclesiastical buildings and museums, including Stained Glass Gallery at the Victoria & Albert Museum, and, as of 2015, the Stained Glass Museum in Ely.

Clarke is survived by two sons, Ben, and Jonathan (also a sculptor), and three grandchildren. An appreciation by Dr Judith LeGrove will follow in a future issue.