July is traditionally the high-point of the London art world’s year, with high-price auctions and spectacular art fairs. This year, there was an added bonus for stained-glass enthusiasts when London-based dealer Sam Fogg mounted an important selling exhibition of thirty-seven sixteenth-century Netherlandish roundels, many with superb provenances [figs 1 and 2]. 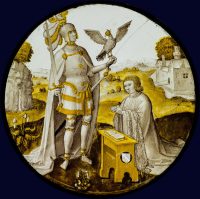 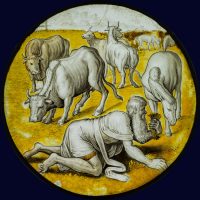 Fourteen of the roundels came from the former home of Sir Thomas Neave (1761–1848) at Dagnam Park, Romford, which was demolished in the 1950s. They include works attributed to some of the leading painters/designers of the period: Jan Swart van Groningen, Dirck and Wouter Crabeth, and Lambert van Noort. Much of the glass seems to have been acquired by Sir Thomas on the international art market after the dissolution of around 700 convents and monasteries in the southern Low Countries by the Austrian Emperor Joseph II (1741–1790). Other roundels in the exhibition came from private collections in the UK and France.