An exhibition entitled Gilded Light: 16th-century Stained Glass Roundels from the Collection of Sir Thomas Neave and other Private Collections will be held at the gallery of Sam Fogg, a leading dealer in the highly specialized field of medieval art, from 1 to 8 July 2016. 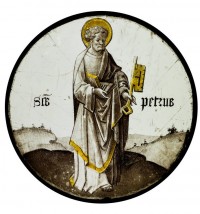 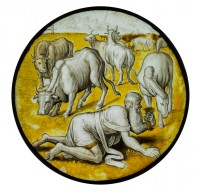 The exhibition brings together thirty-five exquisite stained-glass roundels and panels of other formats, the majority of which were made during the sixteenth century when the art form was at its zenith. The core group of roundels, presented to the public for the first time, were brought together by one of the most important early modern connoisseur-collectors of medieval and Renaissance stained glass, the 2nd Baronet, Sir Thomas Neave of Dagnam Park (1761–1848). An avid enthusiast of European artworks, and particularly of glass, Neave was one of the first private collectors to amass a collection of high-quality stained glass from the Low Countries, purchasing many of his pieces directly from dissolved monasteries and foundations, or through agents such as the German cloth merchant John Christopher Hampp (1750–1825), who settled in Norwich and traded with Flanders throughout his career. Much of the Neave collection was destroyed by fire or has subsequently been dispersed; some of the panels formerly in his collection can today be found in the Victoria & Albert Museum, London; the Burrell Collection, Glasgow; the Metropolitan Museum of Art, New York; and in English churches that the Neave family endowed. His family seat, Dagnam Park in South Weald (Essex) was demolished in 1950, and the remains of his glass collection were dispersed by his direct descendants. Characteristic of Sir Thomas Neave’s taste and acute eye for detail and quality, the group of roundels presented in this exhibition are illustrative of a vivid and breath-taking highpoint in the medium. They are of a quality and state of preservation that is rarely found on the market today.

This entry was posted in Issue 98, News. Bookmark the permalink.