Three lots of stained glass were offered. The most important was an early fourteenth-century Austrian panel depicting St Christina measuring 80.5 x 37.7cm, which soared past its estimate of £10–15,000 to fetch £35,000. Some years ago, the stained-glass historian and Eva Frodl-Kraft (1916–2011), one of the founders of the Corpus Vitrearum Medii Aevi, attributed the panel to a workshop in the Steiermark area of south-eastern Austria and dated it to c.1400–20 (Eva Frodl-Kraft, ‘Die Bildfenster der Waasenkirche in Leoben, Zur Restaurierung und Sicherung’, in: Österreichische Zeitschrift für Kunst und Denkmalpflege, 25, 1971, pp. 70–73). The same workshop provided similar windows for the Waasenkirche in Leoben, Austria (fig. 1). The panel had been acquired by the grandfather of the vendor in around 1960 from Sybille Kummer, an art dealer based in Zurich who specialized in stained glass. 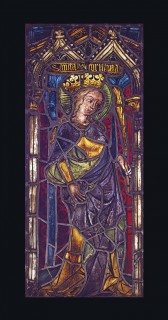 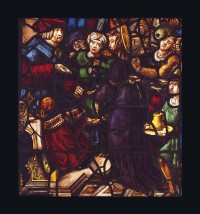 The second lot consisted of two Austrian roundels showing seated Apostles, dated to 1420–50, again bought by the vendor’s grandfather from Sybille Kummer. The larger measured 30.8cm in diameter [fig. 2]. Once again there was fierce bidding, and the lot was sold for £27,500 (estimate £3,000–5,000). Although by a different hand to the St Christina panel and marginally later, the roundels showed many of the same stylistic characteristics as the earlier panel.

Vidimus is grateful to Christie’s for providing the images for this article.

This entry was posted in Issue 93, News. Bookmark the permalink.