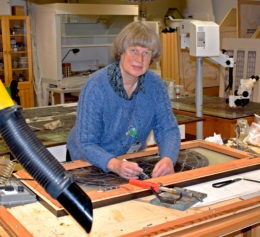 Elena Krylova (Елена Махмудовна Крылова), who passed away unexpectedly from Covid-19, was not only the head conservator but also the spirit and driving force of the Stained Glass Conservation Department of the State Hermitage in St. Petersburg.

Born on 7 November 1951 in Leningrad, Elena Krylova began working at the State Hermitage as a technical assistant in 1971. In 1974, she decided to study History of Art at the State Academy of Fine Arts alongside her work (graduating in 1980) and in 1976 she applied for the position of laboratory assistant in the conservation department of the Hermitage, which had just been restructured. A few years later, she was promoted by the museum management to follow a course of study in glass and ceramics at the School of Art and Design. After graduating, she became the first glass conservator in the Hermitage studio and, having been given a small light table, was able to gradually and, mainly autodidactically, become familiar with the stained glass collection, which had hitherto hardly been touched.

A new era in the history of research on stained glass in Russia dawned in 1992, when the then president of the international Corpus Vitrearum, Prof. Madeline H. Caviness, discovered a new repository of medieval glass and a few stained glass enthusiasts – including the conservator Elena Krylova and the art historian Elena Shlikevich – during her visit to the Hermitage. At Caviness’ suggestion, the Russian committee of the Corpus Vitrearum was founded in the same year and was accepted as the 14th associate member to join the international research project. The very next year, as a member of the Russian CVMA, Elena Krylova was given the opportunity of a research fellowship with Hannelore Marschner at the Zentrallabor des Bayerischen Landesamtes für Denkmalpflege (Central Laboratory of the Bavarian State Office for the Preservation of Monuments) in Munich.

In 2001, the staff of the Hermitage received the long-awaited permission to have a closer look at some boxes of stained glass windows from St. Mary’s Church in Frankfurt (Oder) that had been kept secret for over 50 years. While politicians, the press and academics from both the German and Russian governments fought over the “spoils of war”, Elena Krylova pleaded with the museum administration to set up an in-house stained glass workshop. She herself became the head and unofficial instructor of an initially two- and later three-member team of the first Russian studio for stained glass conservation. Under the greatest political and social pressure, Elena Krylova, Vadim Lebedev and Ekaterina Dutova conserved, documented and prepared fifteen out of a total of 111 medieval panels from St. Mary’s Church for an exhibition within six months. However, this elaborately planned exhibition “The Stained Glass Windows of St Mary’s Church” was disassembled again in a very short time, because, as the result of a request at the highest political level, the return of the stained glass windows to Germany had to be handled very quickly.

Nevertheless, under the direction of Elena Krylova, the stained glass studio remained in operation and ready for the development of the in-house collection, which had been surrounded by myths. In 2002, the first 30 panels from the Hermitage depot were conserved for the exhibition “Western European Stained Glass and Vidimuses of the 15th – 17th Centuries”, followed in 2004 by the restoration of the medieval panels for the exhibition “The Cross of St. Trudpert”. In 2008, the team was entrusted with the conservation of the large-scale composition of the “Lamentation of Christ” by Bartholomew Bruyn the Elder. Finally, in 2010, on the occasion of the 25th International Colloquium of the CVMA in St. Petersburg, the conservation of a considerable number of 16th – 18th-century Swiss panels in the Hermitage was completed. In 2017, Elena Krylova fulfilled her long-time dream and made a set of copies of the panels she had conserved from St. Mary’s Church, Frankfurt, for the Hermitage’s museum education centre.

Since 2006, Elena Krylova offered a course in stained glass conservation at the Saint Petersburg State Institute of Art and Culture. In the last fifteen years she has also been increasingly active in the artistic field, taking part in several one-man and group exhibitions of paintings, graphic art and stained glass. She created the figurative east window for the Church of the Transfiguration of Christ in St. Petersburg. Other modern stained-glass windows, designed and made by Elena herself, now decorate the churches of St. Peter and Paul in Pargolovo and the Prince Vladimir Church in Lisiy Nos near St. Petersburg.

In recent months, Elena Krylova had been working intensively on two 16th-century French panels, depicting the Birth and Decapitation of John the Baptist, which will become the new highlight of the Hermitage’s Middle Ages collection. At the beginning of the new year, the restoration of an extensive collection of panels for the Dürer jubilee exhibition planned for October 2021 was already waiting for her.

Elena Krylova was a joyful person, a blessed teacher, a loyal friend, wife and loving mother, who had a life that was rich with her passion for stained glass and her wide-ranging interests. It hurts everybody who knew her to see her pass so soon.