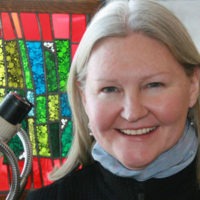 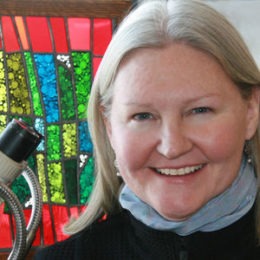 Mary Clerkin Higgins, renowned stained glass artist and conservator, died on Christmas morning, 2020, in Manhattan, following a four-year struggle with breast cancer. Steven, her husband of forty-four years, and their son, Walker, were by her side.

Mary was born November 16, 1954, in Queens, New York, the daughter of Thomas and Margaret Walker Clerkin. Her family moved to the village of Sandy Creek, New York when she was a young child. She graduated from Sandy Creek Central School in 1972 and earned a BA from Fordham University at Lincoln Center in 1976. She and Steven were married on October 9, 1976.

Mary was one of the nation’s leading artists and conservators of stained glass, entrusted with conserving panels dating as far back as the twelfth century, up to the present day, for public and private collections around the world. In addition, she was an award-winning artist whose original works received several awards, among them inclusion in the Corning Museum of Glass’s prestigious annual survey New Glass Review 36 (2015).

In 1976, she began an apprenticeship with Melville Greenland at his studio in the Chelsea neighborhood of Manhattan. She rose quickly to the position of lead conservator for Greenland and, in 1986, founded Clerkin Higgins Stained Glass Inc. in Brooklyn, New York. Over the years, she became a close collaborator with Rowan LeCompte, the renowned artist responsible, among much else, for the West Rose and clerestory windows at the National Cathedral in Washington, DC. Mary worked on over a dozen of Rowan’s Cathedral commissions and was wholly responsible for the fabrication at her Brooklyn studio of two large clerestory projects – “The Suffering and Redemption of Job,” and “The Faith of the Hebrew People.”

Mary presented her research at many conferences across North America and Europe and was a Fellow of the American Institute for Conservation (AIC). She was a co-founder and past president of the American Glass Guild (AGG), receiving the AGG Lifetime Achievement Award in 2017. She contributed the chapter on “Origins, Materials, and the Glazier’s Art” to Stained Glass: From Its Origins to the Present (Abrams, 2003) and wrote the preface to Strangest Genius: The Stained Glass of Harry Clarke (The History Press, 2010). Mary was featured on NPR’s “Science Friday” website and in Peter Swanson’s films Let There Be Light (2012) and Rowan LeCompte: A Life in Light (2020). In 2018 she was an expert guide for Ama Waterways “Stained Glass Along the Enchanted Rhine River” cruise.

Mary’s restoration work lives on in numerous collections, among them the Metropolitan Museum of Art, the Cloisters, Harvard, Stanford, Cornell, and Duke universities, the Baltimore Museum of Art, the Morse Museum of American Art, the Brooklyn Museum, the Wolfsonian, the United Nations, and the Neustadt Museum of Tiffany Glass. In addition to many original autonomous panels, she created an original ensemble of eleven panels depicting the risen Christ and the four evangelists for the Cloister Chapel at Sea Island, GA.

Mary is survived by her husband, Steven; their son, Walker and his wife, Ana, all of New York City; her mother, Margaret Clerkin, of Sandy Creek; eleven sisters and brothers; fourteen nieces; eleven nephews; several in-laws, aunts, uncles, cousins, and many friends and associates in the stained glass community, here and abroad.

Mary entered the stained glass world at a time when few women practiced the craft, or ran their own studios. She carved out a unique place for herself in the male-dominated field through humble tenacity and a simple dedication to the perfecting of her art. She inspired everyone she encountered with her unwavering courage in the face of her disease, with her brilliant laughter, wonderful cooking skills, and, above all, her kind and generous spirit. Her twenty-five nieces and nephews adored her.

A private celebration of Mary’s life, and the scattering of her ashes, will take place at a later date.