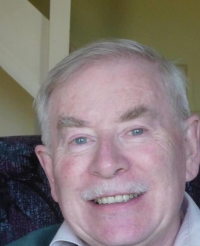 The death of Paul Sharpling in mid-July is an enormous loss to us and in every sense to the study of stained glass, particularly in the East Midlands.

Paul grew up in Northampton and for much of his life lived in Kettering, teaching at Kettering Grammar School. He first became absorbed by stained-glass as a student at Cambridge, where he read Modern Languages, and subsequently at Oxford where he qualified as a language teacher. In recent years he collaborated in the preparation of the revised edition of Pevsner’s Northamptonshire, contributing entries on church windows, and over the years he translated for publication several articles on stained-glass from other languages, as well as translating inscriptions found in windows. Without doubt, he was the expert on the stained-glass of the East Midlands area and an encourager of our local artists such as Derek Hunt, Mick Stokes and Christopher Fiddes. For some years he was an active and sensitive stained-glass adviser to the Diocese of Leicester and, of course, he shared his knowledge widely through teaching courses and through lectures to many local societies.

Paul published several key books on East Midlands glass. His Stained Glass in Rutland Churches was published by the Rutland Local History and Record Society in 1997 and Fragile Images: Post-Medieval Stained glass in Northamptonshire and the Soke of Peterborough (Volume XLIX of the Northamptonshire Record Society) in 2016. In the introduction to this book, Paul wrote that “the current study is the second part of a larger project which began thirty years ago, to record the stained-glass windows of the three southern counties of the East Midlands: Rutland, Northamptonshire and Leicestershire”, counties which formed the Diocese of Peterborough from 1840 to 1926. There is no doubt that the Northants volume was a labour of love, with Paul visiting every church in his home county and describing the contents of every post-medieval window. He also provides comprehensive indices of subject matter, makers, dedicatees and arms bearers, to name but a few. These are all listed by location, and are immensely useful to anyone wishing to follow up a particular interest. Is any other county so well served?

To say that it is to Paul that we owe our very existence as the Leicester Stained Glass Appreciation Group (LSGAG) is to acknowledge our debt to him. As far as we are aware, we are the only local group of a similar nature that has this particular focus anywhere in the country: that itself is a huge tribute to Paul. He was our tutor, our inspiration, our mentor and great friend. Like many of us ‘founder members’, I attended several of what started in Leicester as his Workers Education Association classes. He taught us everything: before then I for one had simply ‘looked’ at most stained-glass windows, as many people do. Paul showed us how to appreciate everything about glass: its art, design, craft, content and historical context. For me personally, he simply opened my eyes to the whole Arts and Crafts period, about which I had no previous knowledge at all beyond the Morris Company, but which is now one of my favourite genres of glass. He was also so pleased when I finally realised the truth of what he was always emphasising, that Victorian stained glass offers so much that is worth discovering, and can be appreciated in all sorts of ways. These are just two examples from the many things he taught me.

I well remember the time when Paul said that he thought that he had taught us everything he could (this was actually not true by a long way), and we decided, because of the enthusiasm which he had engendered, to go it alone and to form our own ‘club’. This was the LSGAG, and here we still are, full of enthusiasm and gaining new members a decade on. Until incapacity and illness overtook him, Paul regularly drove over from Kettering to attend our meetings and to give an annual talk, and when he was unable to do this, he was always prepared to send notes describing the windows in churches we were going to visit. In one of the last conversations I had with him on the phone, he was keen to send me his notes on basic appreciation of glass in case we wanted to set up simple Zoom meetings this autumn for ‘beginners’.

To many of us, Paul became a great and much-loved friend, who was always pleased to give his time and expertise unstintingly. He will be so greatly missed, not only by us, but by all of those interested in glass, both in this area and beyond. Paul had a difficult last couple of years, dealing with tragic events within his family, as well as his own ill health. Yet he was still working on his Leicestershire project right up to the moment of his death.

Paul was so looking forward to finishing and publishing the final volume on Leicestershire, and from everything he said, he has left it almost complete. Our group is likely to take over responsibility for this, and the greatest tribute we could all pay to him would be to make sure that his wishes are fulfilled and to see that his definitive study of our own county is published.

‘A man that looks on glass, on it may stay his eye, or if it pleaseth, through it pass and then the heaven espy’ [George Herbert].