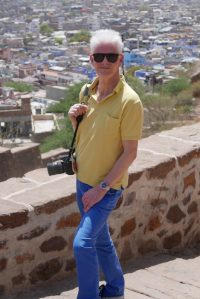 It is with great sadness that we report the death of Peter Martin. A professional architect in private practice in Switzerland for 30 years, Peter was first drawn into stained glass studies by chance. While teaching at the University of Leeds, a cross country cycle ride in the Easter vacation of 2004 brought about an encounter with the sumptuous glazing installed in the church of Wragby. Recognising its Swiss origins, he began to research the collection, and in 2006 submitted an MSc (Eng) by research at the University of Leeds, entitled ‘The Late Georgian Trade in Swiss Stained Glass’. In January 2009 Peter registered as a research student in the History of Art department at York and embarked on a more ambitious project, examining the early 19th-century trade in stained glass between the U.K. and the Rhineland. Commuting between Leeds and his home and business in Switzerland, Peter was able to take a European perspective on this cultural commerce, which culminated in the award of his 2012 MPhil on ‘The European trade in Stained with special reference to the trade between the Rhineland and the United Kingdom, 1794-1835’.

In recent years, he had relocated to Driebergen in the Netherlands. In retirement he continued to research stained glass topics but was also active in the local Driebergen Culture Foundation (De Cuulturhoek), for whom he provided architectural expertise in the renovation and reuse of historic buildings. With his partner, Astrid, he also found time for travel until he was overtaken by illness. He died on 25 February 2019 after a short illness. His research can be consulted at: http://etheses.whiterose.ac.uk/3269/

This entry was posted in Issue 128, News. Bookmark the permalink.