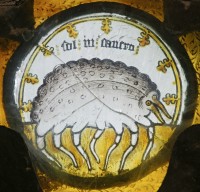 The Heritage Lottery Fund has given £94,000 towards the building of a visitor centre and café at the Church of St Mary the Virgin in Shrewsbury (Shropshire), home to one of Britainʼs most important collections of English and Continental medieval stained glass. Fig. 2. An angel tests Bernard in prayer during a vigil, c.1505–20, originally from Altenberg Abbey

St Mary the Virgin is one of the best-known buildings in Shrewsburyʼs historic town centre. It was founded by King Edgar in the tenth century, although excavations in 1864 revealed the presence of an earlier church. Now managed by the Churches Conservation Trust, it houses a collection of stained glass formed in the 1840s by the then vicar, the Revd William Gorusch Rowland (1770–1851). There are a fourteenth-century English Tree of Jesse Window and a stunning array of Continental panels, including some dated c.1505–20 depicting incidents from the life of St Bernard originally made for Altenburg Abbey. Other treasures include sixteenth-century panels from Herkenrode Abbey, near Hasselt (Belgium), and a superb collection of Netherlandish roundels. Announcing the award, Rebecca Rees, project director for the Churches Conservation Trust, said: ʻWe are thrilled to have received the support of the Heritage Lottery Fund for this project. Now, thousands of visitors will discover the history of this magnificent heritage site.ʼ Fig. 3. English roundel depicting Cancer from the signs of the zodiac, c.1490. Fig. 4. Netherlandish roundel depicting Jonah cast upon the shore, seventeenth century, after a print by Philip Galle of a drawing by Maarten van Heemskerck.

The Churches Conservation Trust cares for over 330 redundant churches, mostly Grade I or Grade II* buildings of national architectural importance. For more information, visit their website.