A Lincolnshire church with an important collection of medieval stained glass has been awarded a £229,600 grant from the Heritage Lottery Fund to carry out extensive repairs to the roof and tackle various other dampness-related problems. 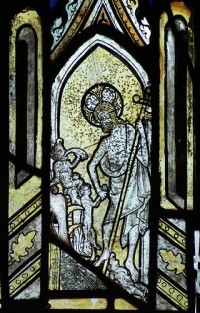 Although parts of Holy Trinity Church, Messingham, date from the thirteenth century, most of what can be seen today is largely the work of the Reverend Dr Henry Vincent Bayley (1777 1844), priest of Messingham 1811 1826, and the architect Edward J. Willson (1787 1854). As part of this work in c.1820, Bayley assembled and had installed a significant collection of medieval stained glass, including fragments from the former Collegiate Church in Manchester, now Manchester Cathedral. He also acquired some late thirteenth-century glass from Scotton Church and some mid-fourteenth-century canopies from nearby Kettlethorpe; the latter include a delightful piece depicting Christ leading Adam and Eve from Hell’s mouth (the Harrowing of Hell).

The glass is discussed in detail by British CVMA author Dr Penny Hebgin Barnes in The Medieval Stained Glass of the County of Lincolnshire, CVMA (GB), Summary Catalogue 3, Oxford, 1996, pp. 181 93. Other images from Messingham can be seen in the CVMA Picture Archive.