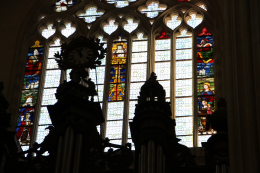 On the 18th July, Saint-Pierre and Saint-Paul Cathedral, Nantes, was severely damaged by fire, allegedly the result of arson by a volunteer church assistant. Firefighters were able to contain the blaze and save the building, but historic furnishings and artworks, including the seventeenth-century organ were destroyed. Among the losses were stained glass windows, including several fifteenth-century stained glass panels, which were in the west window. Video footage of the blaze shows flames and smoke escaping through the stonework of the window, after the glass was blown out. The panels which have been lost were the remnants of a window given in 1498 by Anne of Brittany (1477-1514, Duchess of Brittany and Queen Consort of France) and attributed to Jehan de La Chasse. The extant figural panels occupied the outer lights, and showed Anne of Brittany and her mother, Marguerite de Foix, each accompanied by their patron saints, beneath figures of Elijah and Moses. In the central light was a depiction of the fountain of life.

Vidimus is saddened by the news of this loss, and hopes to provide further information in our next issue.

This entry was posted in Issue 132, News. Bookmark the permalink.