News from the Stained Glass Museum

Posted on February 20, 2022 by Carlotta Cammelli

The announcement of an exciting new acquisition, plus a reminder of the upcoming study weekend. 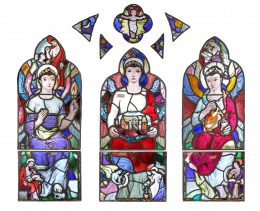 The Faith, Hope and Charity window designed by Wilhelmina Geddes and made to her designs by Charles Blakeman in 1956. Photo: with permission of the Stained Glass Museum.

On 25th January 2022 The Stained Glass Museum successfully bid at auction to acquire the last window designed and cartooned by Irish artist Wilhelmina Geddes before her death in 1955 – the Faith, Hope and Charity window, designed for St Paul’s Church, St John’s Hill, in the parish of Battersea. The window was made to Geddes’ designs in 1956 by Charles F. Blakeman (1907-1989).

Significance of the acquisition

Wilhelmina Geddes was an important figure in the Irish Arts and Crafts movement and 20th-century British stained glass revival. Born in County Leitrim, Geddes was brought up in Belfast and studied at the Belfast School of Art in the 1900s, where she was introduced to stained glass. She subsequently worked at two leading Arts and Crafts cooperative stained glass studios, An Túr Gloine (Tower of Glass) in Dublin (founded 1903) and The Glass House (Lowndes & Drury) in London (founded 1906). She was amongst the first generation of women stained glass artists who benefitted from professional training, achieving recognition in their own right, and who received major commissions in the periods after the First and Second World Wars.

As well as being the last example of Geddes’ work and legacy, the Faith, Hope and Charity window has added significance because it was commissioned by the Revd (Edward) Chad Varah (1911-2007). Varah was the British Anglican rector of St Paul’s Church, Battersea between 1949-1953, and a social activist who, a year after commissioning the window, founded the Samaritans, the world’s first crisis hotline to provide telephone support to those contemplating suicide.

The window was designed and cartooned before Geddes’ death in 1955. It was made to her original cartoons in 1956 by Charles Blakeman, who had been her friend and colleague at The Glass House. In the same year it was installed in the north aisle of St Paul’s Church. However, in the 1960s St Paul’s suffered from amalgamation, reductions in its congregation and closures and in 1972 it was united with St Peter’s. Geddes’ Faith, Hope and Charity window was blocked and boarded up c. 1976 and its fate became more uncertain when the church was sold for mixed development and the window was removed c. 2015. The acquisition of the window by the Stained Glass Museum secures its future, ensuring it is accessible to the public in a permanent museum collection dedicated to stained glass

As Nicola Gordon-Bowe reveals in her book Wilhelmina Geddes: Life and Work (Dublin: Four Courts Press, 2015), Geddes’ working life was interrupted by spells of mental illness and ill health (including curvature of the spine and failing eyesight). This, coupled with her time-consuming method of painting glass in delicate thin washes, and her demanding perfectionism in selecting the right colour and quality of glass, often changing pieces as she worked, resulted in a relatively small overall artistic output. Geddes’ stained glass works are therefore rarely available to acquire.

According to Christian theology and philosophy, the three theological virtues of Faith, Hope and Charity (Love) are associated with salvation resulting from the grace of God. Their importance in Christianity can be traced to the letters of Paul the Apostle in the New Testament (for example, 1 Corinthians 13). There is a long tradition in Christian art of depicting vices and virtues and these subjects are prominent in medieval stained glass. From the 18th century onwards, the virtues of Faith, Hope and Charity were especially popular moralising subjects and appear as female allegories in both religious paintings and stained glass windows. Geddes was a modern artist with spiritual vision, and her unique interpretation of this popular subject is full of symbolism and theological meaning, whilst holding true to tradition.

Geddes’ design for the St Paul’s Church window conceived the three theological virtues as three seated female personifications of Faith, Hope and Charity, one in each light. She interpreted these three virtues as Anglo-Saxon virgin saints, the nuns Mildred (Charity) and her two sisters Mildberga (Faith) and Mildgytha (Hope).

The figures all bear what have become known as Geddes’ hallmark stylistic features – strong necks, arched eyebrows and flared nostrils, long straight noses and large eyes. The window is made using very high quality streaky and flashed glass, with strong use of the pinks, reds, and purples favoured by Geddes. The three virtues are all shown with colourful angel wings, a halo inscribed with their virtue, wearing traditional robes, hair tied up and symbolic floral headband. Above and below the virtues are representations of biblical scenes which provide an illustration of the virtue depicted and imbue the scene with added theological significance.

‘Faith’, dressed in white and lilac robes, holds a candle with a large flame. Her foot rests on a skull symbolising faith in the Christian belief of resurrection and life after death. Above is a representation of Doubting Thomas, just after the moment he puts his finger into the resurrected Christ Christ’s wounds to check if they are real. An inscription painted onto the glass reads ‘BLESSED ARE THEY THAT HAVE NOT SEEN AND YET HAVE BELIEVED’. Below is the apostle St Paul holding a scroll bearing the words ‘I LIVE BY THE FAITH’.

The central light depicts ‘Hope’ dressed in red and white robes. ‘Hope’ holds a representation of Noah in the ark. Noah is depicted leaning out of some doors, welcoming the return of a white dove with an olive branch in its mouth, the sign of hope after the flood subsided. The predella panel below shows the Annunciation where the angel Gabriel, holding a lily and bearing the scroll ‘THE LORD IS WITH THEE’, appears to Mary to bring her news of the hope that is to come (the Christ Child).

‘Charity’ is depicted in the right-hand light, dressed in blue and pink robes. She is shown pouring liquid from a jug into a wine glass. The shape of the jug and the glass suggest they were modelled on Roman examples, and the glass used to represent the liquid, a clear and a streaky ruby, perhaps alludes to the miracle of Christ turning water into wine at the wedding at Cana. Above Charity is a representation of Mary Magdalene washing Christ’s feet with her hair and the painted inscription ‘SHE LOVED MUCH’. Below the Apostle St John is shown seated at her feet, quill in hand, with the scroll ‘THAT YE LOVE ONE ANOTHER’.

The window was purchased with support from the Art Fund and Arts Council England/V&A Purchase Grant Fund.

The museum are also grateful to the Revd Christopher Kevill-Davies who undertook the bidding on the museum’s behalf.

The Stained Glass Museum Study Weekend, postponed for the last couple of years, will take place from Thursday 21st until Sunday 24th April 2022.

From their base in the historic town of Royal Tunbridge Wells, on the edge of the High Weald, the 2022 Study Weekend will explore West Kent. A highlight of the weekend will be a full day in Canterbury visiting the world-famous Cathedral and The Cathedral Studios, a stained glass conservation, restoration and design studio within the Cathedral precinct. This is a fantastic opportunity to get behind-the-scenes at one of the leading conservation studios in the UK, responsible for looking after the internationally significant collection of medieval stained glass at Canterbury Cathedral.

Coach visits on Thursday afternoon and Saturday will include some spectacular 19th and 20th century glass in situ, including the complete set of Chagall windows in the parish church at Tudeley (unique in the UK), a scheme of extraordinary windows by Douglas Strachan in Winchelsea, and fine examples of the work of Morris & Co., Leonard Walker, and Rosemary Everett in the region.

For more information and a booking form please visit https://stainedglassmuseum.com/toursandlectures. Deadline for booking forms is 4th March 2022 (when a deposit is due).

This entry was posted in Issue 138, News. Bookmark the permalink.