Photographer Christopher Parkinson brings us up to date on the dedicated work he has undertaken on behalf of the British CVMA.

I am happy to report that all 166 churches in the county of Essex known to contain seventeenth-century or earlier glass have now been visited. These churches fall within the pre-1974 county boundaries of Essex (those adopted for survey purposes by the British CVMA), so several are now officially in various London boroughs. All accessible glass in these churches has been photographed and the images uploaded to the CVMA’s Picture Archive. The images will not appear however until I have entered the relevant metadata. This has proved a little difficult, as I moved home earlier this year and it has taken the best part of two months to establish a fully functioning internet connection. This has included having a fault at the local junction box fixed. Everything is now working thankfully, so the last batch of thirty churches and their glass will be appearing on the website shortly. 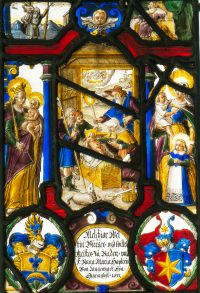 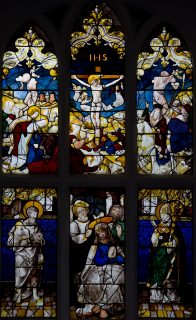 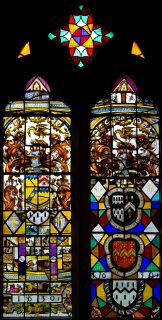 In my travels I have found most surviving pre-Reformation glass to be concentrated in mid- and north Essex, while to the east there is much post-Reformation glass, a good deal of which appears to have been imported from the Continent. Examples of the latter can be seen at St Mary and All Saints, Lambourne [Fig. 1]; St Thomas, Noak Hill [Fig. 2]; and St Laurence, Upminster [Fig. 3], including two fine musketeers, upper right [Fig. 4]. At Harlow, St Mary and St Hugh, there is the famous fourteenth-century representation of the Virgin and Child [Fig. 5], but perhaps just as remarkable is the collection of panels in the north transept north window said to date from the fourteenth to the eighteenth centuries. Sadly, the window is now largely obscured by the organ making photography difficult, but the panels include portraits of Charles I losing his crown and Queen Anne [Fig. 6]. 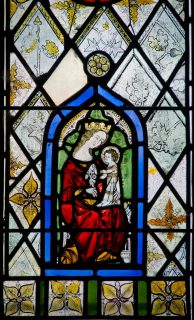 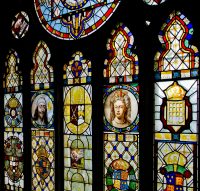 There is still a little more work to do in Essex, on glass that may still be private residences, but I do hope that website users will enjoy browsing through the Essex images and perhaps reappraise their conceptions of this great and fascinating county.