English Heritage has refurbished its museum at Rievaulx Abbey, Yorkshire, displaying many medieval artefacts from its archaeological store at nearby Helmsley. 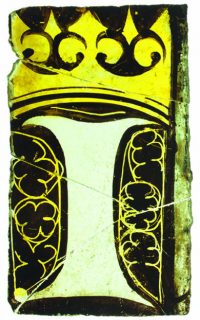 The abbey, suppressed in 1538, was bought by Thomas Manners, 1st earl of Rutland. His inventories of the abbey’s buildings and their fittings, made shortly after he acquired it, provide an exceptionally clear picture of late medieval Cistercian life. Rutland systematically demolished the monastery, seeking a return on his investment by selling the roof timbers and fittings. What remained were architectural and sculptural elements from the twelfth to the fifteenth centuries: roof bosses, corbels, friezes, and the remains of the magnificent fifteenth-century pulpitum, now on display at Rievaulx for the first time.

Also on display are pieces of medieval stained glass, window leads, and beautifully fashioned lead ventilators. Rutland divided the abbey’s window glass into three categories: the best quality was to be kept, the second best to be sold, and the poorest taken from its leads so that the lead could be salvaged. Most of the stained glass recovered during twentieth-century excavations dates from the first half of the thirteenth century, and can probably associated with major works to the east end of the church at this time. But there is also evidence of later work, including a beautiful late fourteenth-century crowned initial, probably from the border of a window featuring St John or James.

Rievaulx Abbey is open every day until the end of October and at weekends during the winter. It also has a fantastic cafe! For details of opening times, see the English Heritage website.