By Catherine Fairless and Hannah Page 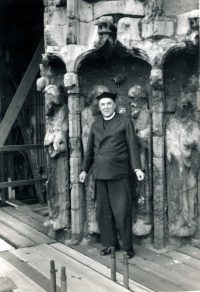 The November Master Class at the University of York, on “Milner-White and All That: The Restoration of York Minster’s Windows c. 1750 –c.1950”, presented by Sarah Brown, course director of the MA in Stained Glass Conservation and Heritage Management, saw perhaps the largest audience in the nine-year history of the event.

The lecture illuminated the approaches taken to conserve the windows of York Minster, and their impact, under the former Dean, Eric Milner-White, who oversaw the windows’ reinstallation after World War Two.
The lecture began with an overview of current approaches to conservation and how these have changed over the centuries. The importance of ancient records and descriptions in modern practice was highlighted: even today the records that began to emerge in the mid. C.18th are necessary in tracking the material changes made to stained glass windows, in an effort to stay contextually and iconographically true to the original installations. Indeed, the work of James Torre has become an immensely valuable source in the ongoing conservation of York Minster’s Great East Window. This cautious and conservative approach, while quite natural to a modern audience, is a stark contrast to the methods of Dean Milner-White whose attempts often saw a questionable skirting of the ethics behind the maintenance of the windows and their imagery.

Eric Milner-White was installed as Dean of York Minster in 1941 and became a driving force in the campaign to reinstall the numerous windows that had been removed from the Minster during World War Two. Together with a small team of glaziers, 38 windows were restored and 8 new windows were installed between 1943-53. Building upon the admiration for stained glass that he developed during his time at Kings College, Cambridge, Milner-White was deeply involved in the work on the windows and regularly popped into the glaziers’ studio. What became apparent throughout the masterclass was Milner-White’s unwavering belief in himself and his approach, using his vast knowledge of theology and the bible to help bring the Great East Window into an order that made sense to him. This led to drastic changes in the window, such as the complete re-leading of entire panels as well as the removal of evidence of previous interventions and the inclusion of new fragments of glass from his own collection and that of the glaziers’ glass store.

The lecture’s chronological structure allowed a full understanding of Milner-White’s influential role and of the extent of the impact his personal approach to the conservation of the windows had on the fabric of the Minster. Sarah discussed his reinstallation, restoration and rearrangement of the windows; she noted that his understanding of iconography and his enthusiasm for acquiring historically and aesthetically provenance glass led – while to the untrained eye, a pleasing restoration – to an historiographically ad hoc filling of the gaps.

Though undoubtedly knowledgeable in many respects Milner-White worked to his own system of restoration, humorously aided, as Sarah mentions, perhaps by his love of detective fiction. His status as a self-styled master glazier perhaps seemed to him to be justification for his actions. However, Sarah in her end-note recognised the debt owed to Milner-White in establishing the York Glaziers Trust that we know today as a centre of excellence in the care of the fabric of the windows. Through observation of practices both questionable and cautious throughout the minster’s history, we manage to conduct ethical conservation today through documenting and discussion.

This entry was posted in Issue 104, News. Bookmark the permalink.