Like many French-Canadians of his generation, Roland Sanfaçon looked to France for his academic formation. After his undergraduate training at Université Laval in Quebec City, he went to France for his upper degrees, at the Université de Poitiers (1957–59) and the École Pratique des Hautes Études and the Sorbonne in Paris where he took a seminar with Élie Lambert (1959–63), studying both Medieval History and Medieval Art History. During this time his passion for late medieval Flamboyant Gothic architecture blossomed. While pursuing his doctoral degree, Roland returned to Québec to take up a teaching position at Laval in 1960 as a lecturer in History and from 1965 as a professor, then from 1969 until his retirement in 1997 as a professor of Art History. During those years, he supervised a large number of master’s students, some on the study of medieval stained glass.  1 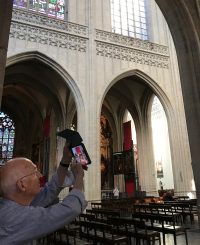 His doctoral dissertation on medieval history was eventually published by the Presses de l’Université Laval in 1967 as Défrichements, peuplement et institutions seigneuriales en Haut-Poitou du XIe au XIIIe siècle.  His return to Laval coincided, however, with the introduction of Art History into a still exclusively historical curriculum, and Roland’s propensity for the material considerations of history were to transform – or broaden – him from a historian into an art historian, with a particular focus on medieval French architecture. In 1969, he was entrusted with the foundation programme in Art History, and two years later, he published his ground-breaking L’Architecture flamboyante en France, which established him as a major scholar.2 Roland’s studies of Gothic architecture also awoke an interest in stained glass which he saw as inseparable from the architecture. He spent years observing and reflecting on the correspondences existing  between construction in stone and in glass.  His interest in stained glass was fueled by the arrival in Québec during the early 1970s of a considerable collection of premodern stained glass, thanks to his colleague, Prof. Jean-Guy Violette, who acquired a large portion of the collection of stained glass of the Parisian dealer Michel Acézat at an auction sale, at the Hôtel Drouot, in 1969.3 More collections drew the attention of Roland Sanfaçon in the period that followed the donation, by Jean-Guy Violette, of 13 panels of stained glass to the University Laval, particularly those of the Musée des Beaux-Arts and of McGill University in Montréal, and the panels from Les Portes Cartier in the Château de Ramezay in Montréal and the collections of the Musée du Séminaire, in Sherbrooke.

In 1984, at the instigation of Jane Hayward of the American Committee, Roland formed the  Canadian Committee of the Corpus Vitrearum and acted as its President from 1984 until 2019, and he also served as the Vice-President of the International Corpus Vitrearum from 1995 to 2000. It is important to recall the importance of Roland’s contribution to the safeguarding and dissemination of antique stained glass collections in Canada, as evidenced by his publications on the subject,4 but also his involvement in the donation and transfer of the rest of the collection of stained glass belonging to Jean-Guy Violette and his brother, Claude, to the Université Laval in 2016, because Roland believed that this imposing collection deserved to be well showcased, and to be easily accessible to the members of the Canadian committee in preparation for the  publication of the second Canadian Corpus Vitrearum monograph.5

Roland valued humanist thought more than anything. His knowledge was immeasurable. When travelling, he demonstrated interest in everything. Despite the long hours of observing and photographing the churches of France, sometimes until dusk, even if it meant lighting their portals with the headlights of his car, he always managed to insert into his program some cultural activities, sometimes an evening at the opera, a theatre play, a ‘son & lumière’ show, or a visit to an art gallery. But he was a hard worker. Every year, since the beginning of his career, he left for Europe, devoting several weeks to the study of French monuments that he visited at the rate of 7 to 8 churches a day. He observed them, photographed them, took notes, taking great care to identify each photo shot to facilitate their identification once back home, and for several years he even made a habit of developing his photographic films himself in his hotel room using a portable darkroom, to ensure that he had succeeded in all his shots before returning to Canada.

Roland looked at everything, and always sought to compare, in order to better understand the essence of things. Sitting at the table of a small terrace in the heart of Antwerp in 2018, during his last participation in a Corpus Vitrearum colloquium, he rejoiced at the sight of a rooster and his hen strolling on the square as if they were a couple going shopping before returning to their hen house across the square. Of course, Roland proposed, with great caution, an explanation for their behavior, which made us, his colleagues and friends, smile. That was so typical of Roland.

He always traveled with a bilingual dictionary, trying to add one more language to his memory, learning new terms from that new language sometimes late at night in his hotel room, and constantly taking notes in small notebooks he made of recycled paper; all of this was all part of the knowledge of the world. His fascination with languages was confirmed by the discovery of a method of indexing Chinese characters based on their visual forms, and which earned Roland worldwide recognition when he published his Chinese-French Kuaisu Shunchang Dictionary in 1997.6 In a way, Roland liked to ‘identify the hidden meaning of complex forms through comparison and contextualization’, a method he applied, as well, to the study of Late Gothic architecture.7 His interest in comparative studies led him, among other things, to even direct a master’s thesis on the spatial organization of Chinese houses of the Ming and Qing periods, and that of French houses of the fifteenth century.8

Roland Sanfaçon was active in a remarkably wide range of research until he was diagnosed with cancer. Yet, just a few days before his death, he had told us about two research projects that he hoped to be able to complete before the big departure: one on the great religions of the world, and the other on the nomenclature of the villages of France. He lived to see the publication of a combined Festschrift and re-edition of his seminal publication in 2020, edited by Stéphanie Diane Daussy as L’Architecture flamboyante en France: Autour de Roland Sanfaçon, but due to the Covid lockdown, a planned book launch could not take place before he passed away on 30 October of last year.9 He left a legacy both of students, including Canadian Corpus member Claire Labrecque, whose doctoral dissertation he supervised,10 and of scholarly works.  He will certainly be missed both in Canada and by the international scholarly community.

This entry was posted in Issue 140, News. Bookmark the permalink.