Fig. 1. His Holiness Patriarch Kirill of Moscow and All Russia greets the relics of St Nicholas in Moscow cathedral © AP

Up to ten thousand people attended a special service at the Cathedral of Christ the Saviour in Moscow on Sunday, May 21st to celebrate the arrival, on a two-month loan, of a four-inch piece of rib bone said to have belonged to St Nicholas of Myra (sometimes Bari), Russia’s most venerated saint. The relic will be displayed at the Cathedral until 12 July when it will be transferred to St Petersburg for the period 13-28 July. The bone has been kept in the Basilica of St Nicholas at Bari in southern Italy, since 1087 when sailors removed the fourth-century bishop’s body from it his original tomb in Asia Minor (now Turkey), possibly to save it from invading Turks (fig.1).

Among the most widely-venerated saints of the Middle Ages, St Nicholas was often depicted in medieval stained glass. In Holland his name evolved into Sintertklass and he is regarded as the inspiration for Santa Claus.

In England there is evidence of a 12th-century St Nicholas cycle or window at York Minster (a surviving panel is now in S27) and remains of 13th-century cycles survive at Beverley Minster (c.1230s), Lincoln Cathedral (c.1230s), Westminster Abbey (1246-59), and York Minster (c.1280s). The last named also has a St Nicholas window made for the new nave in the early years of the 14th century (c.1306-10). Three scenes from his life appear in a window dating from c. 1300 at North Moreton church (Berks) (fig.2). 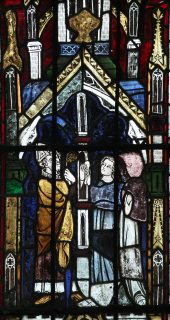 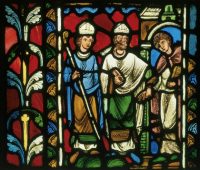 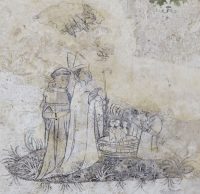 Elsewhere, stained glass cycles of his life and miracles survive in the French cathedrals of Chartres and Bourges. The Victoria and Albert Museum in London has a panel from a cycle that was made for Troyes cathedral, c.1170-80, which shows his selection as the bishop of Myra (fig. 3). Two other scenes from the cycle are now in the Musée national du Moyen Age in Paris.

Among the most famous stories told about the saint in The Golden Legend, the thirteenth-century compendium of saints’ lives written by a former bishop of Genoa, are the saving of three innocent knights from wrongful execution; the giving of dowries to save three girls from slavery/prostitution; and the calming of stormy seas. A legend from a different source describes his revival of three boys pickled in brine by an evil butcher during a famine (fig. 4). 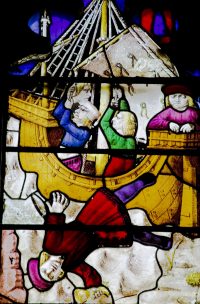 Fig. 5. The Miracle of the Cup, parish church of Hillesden, Bucks.

Two other stories are worth mentioning. The Miracle of the Cup appears in stained glass of c.1510-19 at Hillesden church, (Bucks) (window sIV), and among the wall paintings in Haddon Hall chapel (Derbys) dating to c.1427. The miracle story tells of a wealthy man who promised to present a gold cup to the saint’s tomb if he were given a son. The boy was duly born and the man had the cup made but when it was finished he kept it for himself and ordered a replica for the saint. On his voyage to the tomb he asked his son to fetch him some water in the original cup. But the boy fell overboard and was presumed drowned. Although grief-stricken, the father continued his journey to the tomb where he eventually offered the replica cup to the saint, only for an unseen hand to throw it back and knock him to the ground. His ‘dead’ son then appeared holding the original cup and explained how St Nicholas had saved him. The grateful father gave both cups to the saint (fig. 5).

The second story, also depicted at Hillesden, involved a rich pagan who placed a statue of St Nicholas in his house to protect his valuables. When he was robbed by thieves he thrashed the statue. Sometime afterwards St Nicholas appeared before the thieves displaying his injuries from the beating. The thieves returned the stolen goods and the pagan converted to Christianity. This story is also told in one of the panels from Troyes cathedral now in Paris.

Single images of St Nicholas appeared in many English churches, especially in coastal areas where he was often invoked by sailors. Buildings and altars were dedicated to him including the leper hospital at Harbledown, near Canterbury (Kent) and King’s College, Cambridge.