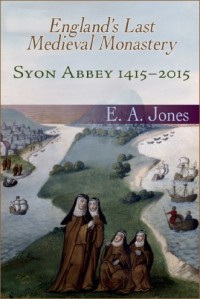 An important new book has been published to coincide with the 600th anniversary of the founding of Syon Abbey, the only monastery of the Brigittine Order to be established in England before the Reformation and, by the time of its dissolution in 1539, the tenth wealthiest monastery in Henry VIII’s kingdom. It was also home to a famous library, which contained nearly 1,500 books.

Called England’s Last Medieval Monastery: Syon Abbey 1415–2015 and written by Dr Eddie Jones, Associate Professor of Medieval English Literature and Culture at the University of Exeter, the book provides a helpful backdrop to the discovery of more than a 1,000 fragments of medieval stained glass excavated in recent years by students from the Department of History, Classics and Archaeology at Birbeck, University of London [fig. 1]. Some of the fragments retain painted decoration, including lettering, heads of angels or saints, and part of a Crucifixion scene. It is hoped that a report on these finds will be published in the near future [fig. 2].

The Brigittine Order was founded by St Bridget of Sweden in 1346, although it did not receive papal recognition until 1370. St Bridget claimed to have had conversations with Christ, known as her ‘Revelations’. Brigittine foundations were unusual in that they housed both women and men, who lived in separate cloisters. There was a shared church, but the nuns worshipped separately in a raised gallery. The Order at Syon was known as the ‘Order of St Saviour and St Bridget at Syon’, alluding to the ‘City of David which is Zion’ mentioned in the Bible (1 Kings VIII, 1), built on the eponymous Mount Zion. The abbey was founded in 1415 by Henry V, as part of an ambitious plan known as the ‘King’s Great Work’ to make his palace at Sheene, about nine miles south-west of Westminster on the River Thames, a major centre of Lancastrian influence, adjacent to three monastic foundations: the Carthusian monastery at Sheene itself, a Celestine monastery (a branch of the Benedictines, founded in 1244 and so named after the election of their founder to the papacy as Pope Celestine V (d.1296)), and the Brigittine abbey, on the opposite bank of the river [fig. 3]. 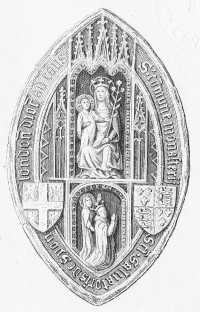 Fig. 3. Engraving of the original seal of the abbess and convent of Syon Monastery, Isleworth. In the upper part, the Virgin Mary holds the infant Jesus in her right arm, and a lily stem in the other, symbolizing her purity. In the lower part the founder of Syon Monastery, Henry V, prays to the Virgin and Christ through the intercession of St Bridget, who stands behind him. Dated between 1415 (founding of the abbey) and 1422 (death of Henry V). Printed in G. J. Aungier, The History and Antiquities of Syon Monastery, London, 1840.

Although most of the foundations of the abbey are now underground and below later buildings, archaeologists have estimated that its church would have been about the same size as Salisbury Cathedral, suggesting that only a tiny fraction of what might once have been some spectacular glazing schemes has survived the iconoclasm and subsequent demolition of the abbey buildings.

After the Dissolution, the abbey buildings were dismantled completely and the land given to the duke of Somerset, who built Syon House and gardens in the Italian Renaissance style. Syon later fell into the possession of Henry Percy, duke of Northumberland, and has stayed in his family since 1594. Today, the duke and duchess of Northumberland live in Syon House and it is open to visitors and events. The website for Syon Park includes photographs and a description of the house and a brief historical synopsis of the abbey after its dissolution.

This entry was posted in Issue 93, News. Bookmark the permalink.