This year, the Stained Glass Museum’s autumn lectures focus on neglected aspects of twentieth-century stained glass in Britain. There will be opportunities to hear about the successful Arts & Crafts artist Theodora Salusbury (who is not as well known as her peers), the important role that the Lowndes & Drury studio (often known as the Glass House) had in the production and development of stained glass immediately after the Second World War, and the stained-glass artist and painter Keith New, whose work at Coventry Cathedral should have launched a successful career, but whose significance is only now beginning to be appreciated.

Thursday, 29 September 2016, 7pm for 7.15pm start. Theodora Salusbury was born in Leicestershire and followed several courses of art training in the early twentieth century, including ones at the Slade School of Art and the Royal College of Art; she also served a four-year apprenticeship with Christopher W. Whall. Most of her known work dates from between the two World Wars, and was produced in studios in Kensington (London) and Cornwall. She was among those artists who used the facilities of Lowndes & Drury at the Glass House (Fulham), and her work is often identifiable by the use of a peacock as her maker’s mark. Andrew Loutit is Salusbury’s great nephew. He has travelled far and wide through England and Wales following up information from stained-glass experts and friends in order to find his great aunt’s windows.

Thursday, 6 October 2016, 7pm for 7.15pm start. Founded in 1897, the London firm of Lowndes & Drury played a vital role in twentieth-century stained glass in Britain. From the surviving archives, at least 150 artists had their work made at its premises. The studio is well known for its contribution to the Arts & Crafts movement, but this lecture, after describing the early history of the firm, will focus on the English work that emerged from the studio in the post-war period. Alan Brooks has carried out considerable research into nineteeth- and twentieth-century stained glass. In 2012, he published The Stained Glass of Francis Spear, the first study of Spear’s work. Since then, he has been researching the many artists and craftsmen who worked at the Lowndes & Drury studio in Fulham, also known as the ‘Glass House’. 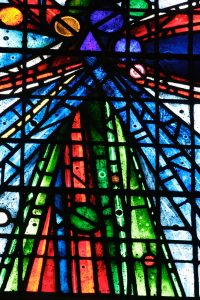 Thursday, 13 October 2016, 7pm for 7.15pm start. It could be argued that Keith New is only known for his contribution to the nave windows at Coventry Cathedral. This lecture will examine examples of New’s work that demonstrate his range and techniques beyond Coventry. Important examples of his work that have been lost will be evaluated against surviving windows that reveal New’s response to colour, light and new techniques. Diana Coulter is a historic buildings consultant who, for a period of fifteen years, knew Keith New in his later life, after his retirement from the position of Head of Foundation Studies at Kingston Polytechnic. Seeing the great east window of St John Ermine for the first time in 2010 triggered the idea of researching New’s stained glass. Access generously provided to family papers, designs and other materials has enabled Diana and her research partner, Dr Robert Smith, to pull together a more detailed study of Keith New as an artist and craftsman, which should be published in the next year.

Paradise and Other Places: Images Inspired by the Divine and the Everyday

‘Paradise and Other Places’, an exhibition jointly curated by Ely Cathedral and the Stained Glass Museum, celebrates the rich and inspiring cultural heritage of Ely Cathedral and its spiritual resonance today. The exhibition features large-scale drawings and paintings by artist Mick Abbott inspired by the splendour of Ely Cathedral’s architecture, and artworks found in the building as well as in the collection of the Stained Glass Museum. Combining architectural and decorative features found in the building with religious themes and contemporary portraits of local people, Abbott’s work strives to connect the past and the present, the human and the divine. A little bit of paradise will be found in every corner of the cathedral, from the whimsical and sometimes irreverent medieval misericords to the vibrant and colourful stained-glass windows.

Mick Abbott divides his time between Cambridge and Brittany, and for more than twenty years was an art teacher at Comberton Village College. He has been in residence at Tintern Abbey (2014) and several National Trust properties, including Newark Park and Hanbury Hall (2011). ‘Paradise and Other Places’ is the culmination of a year’s work.

‘Paradise and Other Places’ is free and will run until 15 July in the south-west transept of Ely Cathedral. On selected days during the exhibition Mick will drawing and painting in the transept.