July’s 2015 Harlaxton Medieval Symposium contained much of interest to stained-glass historians. Apart from papers by Professor Richard Marks, Sarah Brown and Nicholas Rogers specifically about aspects of pre-Reformation glazing schemes (see Vidimus 92), other speakers at the event also touched on the subject in different ways. Discussions over (not too many) glasses of wine also provided plenty of new ideas for future articles in Vidimus [fig. 1].

Two highlights of the symposium were the visits to Thorney and Croyland abbeys, the former containing the six panels of late medieval German glass set within borders of re-used fragments of English medieval glass that featured in our top story. The proceedings of the conference will be published by Shaun Tyas of Donington. 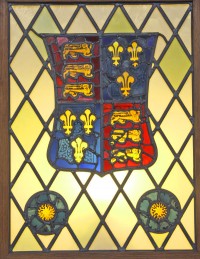 The theme for next year’s symposium has also been announced. It will focus on ‘The Medieval Great Household’, in the British Isles from the eleventh to the early sixteenth centuries. Papers will look at changing structures of accommodation within the household and the use of space; household membership, lords and their servants; domestic material culture; literature, music and entertainment in the household; the role of private chapels; sensory environments, consumption and the routines of the household. The afternoon outing will be to Gainsborough Old Hall, one of the finest and best-preserved fifteenth-century manor houses in England. Speakers will include Martha Carlin, Emma Cavell, Caroline Dunn, Maria Hayward, Martin Heale, Elliot Kendall, Sue Powell, Kent Rawlinson, D. Vance Smith, Jenny Stratford, Jennifer Ward, Fiona Whelan, and Louise Wilkinson. Some of these papers are likely to be of interest to stained-glass historians, as such houses often contained private chapels with painted windows, heraldic displays in the glazing of great halls, and roundels displaying subjects such as the Labours of the Month, in smaller rooms.

Further information, including a provisional programme, will be available spring 2016.

Gainsborough Hall retains a few reminders of its original glazing, including a late fifteenth-century example of the royal arms of England [fig. 2].