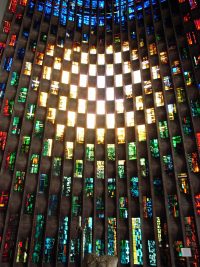 Tate Liverpool’s Winter exhibition programme includes a new exploration of the work of John Piper: a formidable, multi-layered British artist, travel writer and photographer.
A collection of 40 of his works covers Piper’s wide-ranging interests, inspirations and lasting legacy.  It shows his relationship with major international artists while revealing his pivotal influence on modern art in Britain from the 1930s onwards.
Piper had a deep understanding of and sensitivity to early art forms including medieval stained glass windows and Anglo Saxon stone carving.  His love of creating beautiful stained glass is shown in the centrepiece commission for Liverpool’s Metropolitan Cathdedral of Christ the King which is seen by millions of visitors in its 50th anniversary year.  Piper was also instrumental in creating the spectacular stained glass at Coventry Cathedral in the post-war period.

This entry was posted in Issue 115, News. Bookmark the permalink.