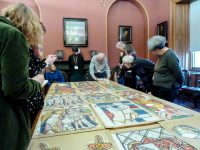 A private viewing of important cartoons of the famous medieval glass at Tewksbury Abbey (Glos) was held at the Society of Antiquaries of London in February prior to the drawings being professionally conserved by Derrick Chivers FSA.. [Fig.1]

The cartoons were produced in 1923 – 25 during a major restoration programme of the glass initiated to coincide with the Abbey’s 800th anniversary.

The restoration project was undertaken by the well-known glazing company of Kempe & Co under the direction of Walter Tower (a distant cousin of the firm’s founder, C. E. Kempe).

Most of the cartoons were drawn by the firm’s chief draughtsman, Rudolph Tanner (1895 –1978), and were probably produced as a record of the glass (colour photography was still in its infancy at this time), as well as a possible aide to glaziers working on the restoration project (although they show no sign of workbench use). The cartoons also highlight the design, cutting and painting skills of the original glaziers (see Fig. 10). Finally, they provide a valuable ‘Before & After’ guide to the conservation approach adopted by Walter Tower (see Figs 6 & 7).

A short biography of Tanner can be found at the foot of this article.

The cartoons of the Tewkesbury glazing were given to the Society of Antiquaries by Walter Tower FSA after the closure of the firm in 1934.

The viewing was organised by Leslie Smith FSA, the Hon. Librarian of the British Society of Glass Painters.

The medieval glass of Tewkesbury Abbey is among the most frequently illustrated in England. It consists primarily of seven choir clerestory windows made c. 1337-39; three each side extending westwards from the central east window.

The five-light east window (CVMA Numbering system I) depicts the Last Judgement with Christ as Judge in the central light displaying his five wounds and enthroned on a rainbow.  [Fig.2] 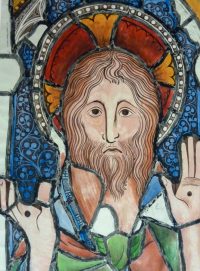 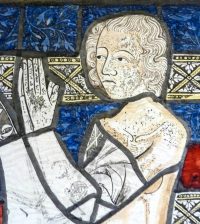 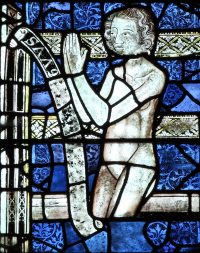 The Virgin Mary sits on his right hand while to his left the figure of St Michael holds a shield, now filled with miscellaneous fragments, but originally depicting the Arma Christi, the instruments associated with Christ’s Passion, e.g., the nails of his crucifixion. St John the Baptist holding the Agnes Dei (Lamb of God) and a group of apostles including St Peter and St Paul fill the first and fifth lights. Below these figures are four smaller scenes of the resurrection with an angel summoning the dead from their graves, the saved entering paradise and the damned being dragged to Hell by a hideous demon with a beaked face. The extreme right panel depicts a kneeling naked ‘donor figure’ with her hands raised in prayer. [Figs. 3 & 4]

Above the east window is a rose window with twelve-petalled tracery incorporating the Coronation of the Virgin surrounded by angel musicians.  [Fig. 5]

Biblical images also fill the immediate adjacent side windows with figures of prophets and kings from the Old Testament appearing in the south-east, south, north-east and north windows (SII, SIII, NII and NIII).  [Figs. 6, 7 & 8] 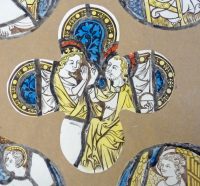 Fig. 5. Kempe cartoon of the Coronation of the Virgin © SAL. 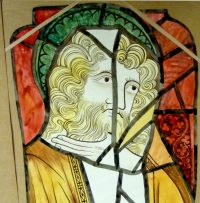 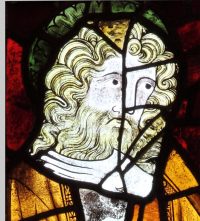 Fig. 7. In situ stained glass of same head showing Kempe & Co insert into the hair of the prophet.

Armoured figures of the secular lords whose family were the Abbey’s principal founders and benefactors complete the scheme in the outermost windows on each side (SIV and NIV). [Figs. 9, 10 & 11]

Although the Abbey glass paintings are of high quality no documentary sources survive to identify the workshop or team of painters responsible for the scheme. CVMA Committee  member, Sarah Brown FSA, has drawn attention to stylistic similarities with fourteenth-century glazing schemes at St Augustine’s  Abbey in Bristol (now Bristol Cathedral) and St Peter’s Abbey in Gloucester (now Gloucester Cathedral) whilst noting that the Tewkesbury paintings are of an earlier date than these other major west-country glazing schemes.

Careful study of the Tewkesbury glazing has highlighted some of the working methods and skills of the painters, including the use of glaziers’ tables as described by the 12th century author, Theophilus, in his treatise  explaining how stained glass windows were made.  This method saw cartoons drawn full-size on trestle tables, rather than on reusable paper which was not available at this time. Thus the armoured figures of the secular lords are all drawn from small variants of the same basic cartoons and two of the four kings depicted are also from the same cartoon, both examples highlighting the economical working methods of the glaziers.  [Fig. 12] 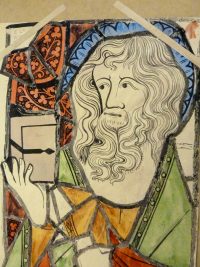 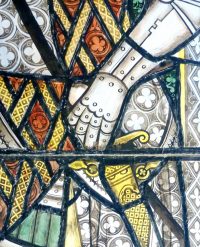 At the same time other details of the scheme reveal labour intensive refinements such as the use of seven intricate rinceau designs (foliate patterns) as backdrops to the figures and the employment of eight different border motifs. [Fig. 13]

An article about the Tewkesbury glass published in 1923 by the eminent medievalist, Gordon McNeil Rushforth FSA ( see below for online link), concluded that the donor of the windows was the wealthy heiress  Eleanor De Clare ( 1292-1337) whose two husbands appear among the armoured figures depicted in SIV and NIV. He also suggested that the kneeling woman shown at the foot of the East window Last Judgement scheme was a ‘donor figure’ of Eleanor herself, see Figs 3 &4.

Fig. 12. In situ stained glass of three armoured knights from the same glazing table cartoon. The reuse of the cartoon creates a pleasing rhythm to the scheme, Tewkesbury Abbey. 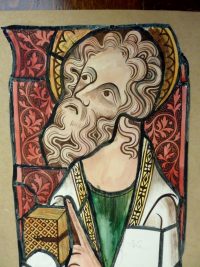 Sarah Brown’s reconsideration of the glass – and to which this report is greatly indebted – questioned Rushforth’s conclusions arguing that the ‘donor figure’ may be a later insert from a now lost glazing scheme elsewhere in the Abbey and wondering if he had also discounted the possible role of the abbot and monks of the abbey in the conception of the scheme.

Thanks to:
The Society of Antiquaries of London for permission to reproduce the images of the Tanner cartoons.

Leslie Smith FSA,Hon.  Librarian of the BSMGP, for arranging the viewing of the cartoons.

Adrian Barlow, the Kempe Society and author of Espying Heaven:
The Stained Glass of Charles Eamer Kempe and his Artists, the Lutterworth Press, 2019, for advice about Rudolph Tanner.

Rudolph Tanner (1895-1978) studied drawing, modelling and calligraphy at the London School of Arts and Crafts, a college established by the London County Council to provide specialist art teaching for workers in craft industries. After the outbreak of the WWI he enlisted in the London Irish Rifles and was twice injured before being declared unfit and honourably discharged in January 1918. After the war he became involved with the arts and crafts artistic community in Ditchling (Sussex) led by the sculptor and printmaker Eric Gill (1882-40). He subsequently became a draughtsman/designer for Kempe & Co, although it is unclear whether this was in a full-time or freelance capacity. There is a 1928 window by him for Kempe & Co in St Catharine’s Church Nottingham, now Christ-Citadel International Church. When stained glass commissions dried up in the 1930s Tanner retrained as a silversmith and jeweller and in 1936 hr made a cigarette box in response to a Goldsmiths’ Company competition for items to commemorate the impending coronation of Edward VIII. The box was subsequently exhibited in Paris in 1937 at the Exposition Internationale des Arts et des Techniques where it won a commendation. It is now in the collection of the Victoria & Albert Museum.

For the life of Rudolf Tanner see:

This entry was posted in Issue 124, News. Bookmark the permalink.