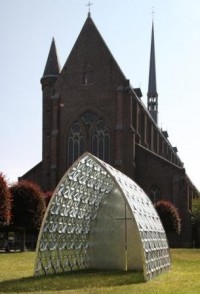 In 2011, a collaboration of Geert De Groote Architecten and Katrien Mestdagh of Atelier Mestdagh resulted in the design and execution of a fully demountable stained-glass chapel, simply called de Kapel (‘the Chapel’). The project was selected to participate in Diafaan V, a festival devoted to the glass arts, which took place on the historic site of the Sinte-Elisabeth beguinage near Ghent (Belgium) where the Chapel was beautifully positioned in the middle of the green area between the church and the old hospital chapel. The Chapel was recently part of an exhibition at STAM, the Ghent city museum, entitled ‘Models. Imagining on scale’ (14 November 2014 – 26 April 2015).

In terms of form and design, an idiom was used whereby every part of the Chapel is a geometric simplification of a symbol or architectural element. Specifically, the curved shape refers to the pointed arches of the Gothic period, the round stained-glass panels to traditional rose windows, and the structural composition and the interweaving of the circles to the structural rib vaulting within churches. Although the structure is a chapel in the classical sense of the word, anchored in the history of religious architecture, and inspired by historical forms, this is not its intended function, nor is it experienced by the public in that way. The Chapel affords an opportunity to reclaim public space for the celebration of private moments – such as births, weddings, funerals – and is meant to be a meeting place for anyone, at any time.

The Chapel is a prototype, a structure that emerged in an experimental way. A steel tube with a diameter of 530mm was cut into discs 30mm thick. Each disc was perforated in six places to facilitate connections. They were then attached to one another by butterfly screws and bolts, forming a structural steel network. All steel elements were galvanized to prevent corrosion. Seven different transparent glass types were chosen, the colours being consciously kept to neutral tones. The chapel is built out of eighty-one round panels, each of which is made of twelve pieces of textured, white or coloured glass, held together with lead. All of the 1458 pieces of glass were cut by hand. The leading, soldering, and puttying of the stained glass were carried out in a traditional way. The round panels were assembled on, and are supported by, the steel discs, creating visually interconnecting curved lead lines that leave the impression that the circles are interwoven. Two laser-cut steel plates close the interior space at one end, and function also as a wind-brace. 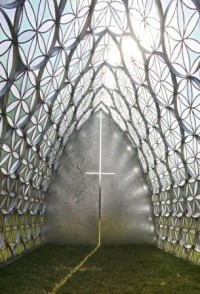 Until September 2015, the Chapel will be undergoing a few changes in order to perfect its structure and to make it easier to dismantle. It awaits a final and definite location and owner, but in the meantime will be relocated from one public space to another.