A rare panel of English Renaissance glass dating from the 1530s and depicting the prophet Ezekiel has been stolen from Withcote Chapel in Leicestershire [fig. 1]. 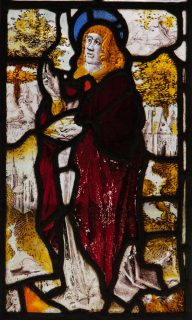 According to the police, the theft occurred between 24 and 30 July. A spokesman for the Churches Conservation Trust, which cares for the chapel, told The Times newspaper: ‘The suspicion is that the thieves knew what they were doing and what they were looking for’ – prompting speculation that the panel was stolen to order.

The scheme at Withcote is one of the lesser-known treasures of pre-Reformation glazing in England, installed in an oblong chapel with four three-light windows along both the north and south sides. Before the theft, eight of the original twelve Apostles holding Creed scrolls survives, together with ten of their Old Testament counterparts [fig. 2].

The stained-glass historian Hilary Wayment (see under Further Reading) suggested that the scheme may have been a scaled-down version of the glazing designed and executed in the 1520s for the chapel of Cardinal Wolsey’s palace at Hampton Court, nearly twelve miles south-west of central London. Each figure is set under an elaborate canopy with Renaissance detailing. Comparisons have been made with the King’s College Chapel windows of 1526–31, particularly window nIII. Christopher Woodforde suggested that the Withcote windows may have been painted by Galyon Hone, one of the King’s College painters, but no documentary evidence supports this attribution, and Harrison has argued that the artist’s hand cannot be distinguished with certainty. The badge of Jane Seymour, the third wife of king Henry VIII, in the north-west window suggests that the glass dates from her reign as queen, i.e., between 30 May 1536 and 24 October 1537 [figs 3 and 4]. 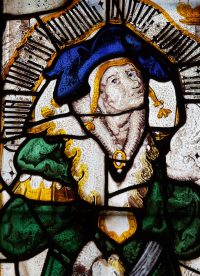 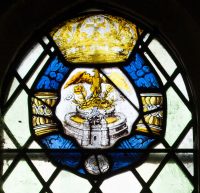 Fig. 4. The badge of Jane Seymour.

Withcote Chapel was built as a private chapel by William Smith (d.1506), the lord of the manor, and probably finished in the 1530s by his widow Catherine and her second husband, Roger Ratcliffe, who had been a gentleman of the bedchamber to Catherine of Aragon. It later became a parish church.

The glass is extensively illustrated in the CVMA Picture Archive.