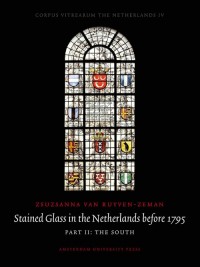 Zsuzsanna van Ruyven-Zeman’s Stained Glass in the Netherlands before 1795, the fourth volume of the Dutch Corpus Vitrearum, has been awarded the Karel van Mander prize by the Association of Dutch Art Historians [Fig. 1]. This most prestigious prize, awarded to a book dealing with the fine arts and decorative arts of the period 1550–1700, is awarded once every three years, and there were more than 1,500 contenders from the period the jury was considering.

The jury considered van Ruyven-Zeman’s work to be impressive and irreplaceable, providing as it does a complete overview of monumental stained glass in the country, and forming the basis for research in the field for decades to come. The clarity of the catalogue arrangement was noted, as was the usefulness of the maps detailing the locations of extant and lost glass. Also appreciated were the introductions to each province, which, in line with the Corpus Vitrearum format, provide an overview of the glazing, artists, commissioners, iconography, technique and restoration history, as well as lost glass. It was also noted that the opportunity had been taken to provide updated coverage of St John’s Church in Gouda, which had been the subject of the first three volumes of the Dutch Corpus Vitrearum. The work abounds in new discoveries, and in short constitutes an extremely rich and well-documented overview of the current state of our knowledge of stained glass in the Netherlands. The prize is named for Karel van Mander (1548–1606), who was a painter, a poet, and the first Dutch art historian: his Het Schilder-boeck (‘The Book of Artists’) was published in Haarlem in 1604 [Fig. 2]. Although it draws material from Vasari’s Le Vite de’ più eccellenti pittori, scultori, e architettori (‘Lives of the Most Excellent Painters, Sculptors, and Architects …’), with which van Mander would have been familiar from time he spent in Italy, the work includes important chapters on early Netherlandish painters.