After a year’s closure, the grade I listed chapel of Trinity College, Oxford, was reopened in April 2016. After one of the most comprehensive schemes of conservation and repair the chapel has undergone, it is once again resplendent in its former glory. Conservation work has been carried out on the entire chapel, including the east wall and the reredos; the woodwork (carvings, screens and panels); the pews; the ceiling, featuring paintings by Pierre Berchet (1659‑1720); the plasterwork; the floor; the founder’s tomb; and the organ. The beautiful scheme of stained-glass windows was also conserved, and a window in storage for over seventy years reinstalled. 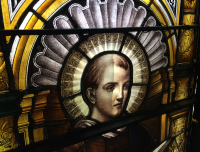 Fig. 1. The right side of the face of St Leonard cleaned, the left side showing the build up of dirt on the glass.

Trinity College was founded in 1555, using the buildings of the former Durham College, but the medieval chapel, consecrated in 1410, was in a poor state of repair by the seventeenth century. The present chapel was built in the 1690s under the guidance, design and funding of the then president of Trinity, Ralph Bathurst. It was built over three years ‑ at that time a short period for such a project. Letters reveal that Bathurst had assistance from Sir Christopher Wren, who was consulted on the design at an intermediate stage, but in time to influence the external appearance and to give the parapets their wonderful, flaming urns. The finest craftsmen of their day were employed to produce what diarist Celia Fiennes, a pioneering and enthusiastic seventeenth-century traveller, described as ‘a fine neate chapple new made finely painted … now it is a Beautifull Magnifficent Structure’.

Although a nineteenth-century addition, the stained-glass windows are a significant feature of the chapel and they have now been cleaned for the first time in sixty years (Fig. 1). The accumulated grime, dust and dirt was painstakingly removed by a team from York Glaziers Trust, and small in situ repairs were carried out (Figs 2 and 3). The cleaning has shown off these windows to magnificent effect, and light now streams through the windows, which were almost opaque with dirt prior to conservation.  The windows were designed by J. W. Brown of Newcastle and made by Powells of Whitefriars. They were installed in 1886 under the direction of the then bursar, Henry Woods (elected president in 1887), to replace the original, plain glazing, and depict saints known to have been associated with the medieval chapel. The windows on the south side depict the Blessed Virgin Mary, one of the dedicatees of Durham Cathedral; St Cuthbert, bishop of Lindisfarne, whose shrine is at Durham; St Benedict, founder of the Benedictine order followed by the monks of Durham; and the Venerable Bede, also buried at Durham. On the north side are St Catherine of Alexandria, to whom there was an altar in the medieval chapel; St Oswald, king of Northumbria, connected to both Lindisfarne and Durham; and St Leonard, to whom there was a window in the medieval chapel, although he had no obvious connection to Durham College (and, as patron saint of prisoners and child-bearing women, seems an unlikely choice).

The final window on the north side is the newly reinstated window to Isaac Williams, which was the first of the nineteenth-century windows to be installed. Fellow of the college, Isaac Williams (1802‑1865) was a leading figure in the Oxford Movement and this window in his memory was given by public subscription in 1873. It was crafted by the Königliche Glasmalereianstalt (Royal Bavarian Stained Glass Establishment) and depicts in rich colours the Crucifixion (Fig. 4) and Moses striking the rock, surrounded by architectural iconography echoing the screen and reredos. The window had been stored in the attic of the chapel, in a wooden crate, since its removal in the 1940s. All of the windows were removed from the chapel for protection from wartime damage, but the decision was made not to reinstall the Isaac Williams window after the conflict. Fortune had nevertheless been kind to the glass: when it was taken out of its crate, only three small pieces were damaged and these were easily repaired. Although the window is in good condition, the painted surfaces of the coloured glass were felt to be too fragile to expose to the elements. The window was therefore conserved (Fig. 5) and returned to a protective environment of isothermal glazing and installed in an innovative subframe developed by York Glaziers Trust. The existing (plain) outer window has been retained and acts not only as the protective glazing, but from the outside, largely retains the appearance of the window as it was. 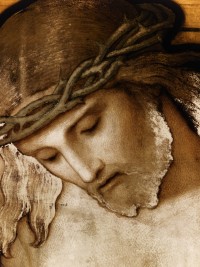 Fig. 4. Detail of the face of Christ in the Isaac Williams window. 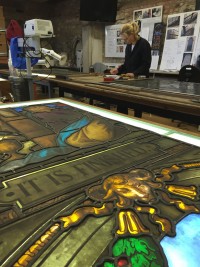 Fig. 5. The Isaac Williams window being conserved in the studio.

Over fifty craftsmen and women were involved in this major project, which was completed on time and with few unexpected challenges. The project captured the imagination of all of those who worked on it, and their contributions widened our understanding of Trinity’s best-known and most fascinating building.

Text by Martin Hall, chapel surveyor and contract administrator. A full version of this article was previously published in The Chapel of Trinity College Oxford: A Guide to the Restored Chapel, 2016. More information and links to additional articles and coverage of the restoration project can be found on Trinity College’s website.

This entry was posted in Issue 99, News. Bookmark the permalink.