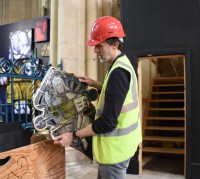 Nick Teed with the panel depicting God the Father

Work has begun this month on the reinstallation of the conserved tracery panels of the Great East Window of York Minster – starting, appropriately, with God the Father. The panel has been returned to the apex of the window seven years after the panels were removed for conservation.

The window, which was created in 1405–1408 under the direction of John Thornton of Coventry, is being conserved at York Glaziers Trust as part of the York Minster Revealed project, a £20 million investment over five years, generously supported by the Heritage Lottery Fund and scheduled for completion in spring 2016.

‘It is a fantastic achievement by the team to have reached this milestone and to begin returning the stained glass to the window marks an important date in York Minster’s history’, explained Sarah Brown, Director at York Glaziers Trust. ‘The Great East Window is one of the great artistic achievements of the Middle Ages, a stunning expanse of stained glass of unparalleled size and beauty in Britain. The work undertaken as part of this project will ensure this masterpiece is preserved for hundreds of years to come. In terms of returning the glass to the window, it seemed fitting to start with God the Father and work downwards, with the medieval perception of human history unfolding beneath his feet.’ 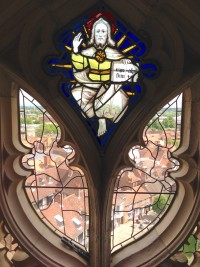 God the Father in situ at the apex of the window

Conservators have almost completed the installation of the protective glazing, which is manufactured with Lamberts UV Resistant glass (Vidimus 77), and the original panels will return to the window in bronze frames (Vidimus 88) as part of the isothermal glazing system. The tracery panels will be reinstalled first, followed by the famous Apocalypse cycle panels, and finally, the Old Testament scenes. The conserved panels will be slowly revealed as the interior scaffold is lowered, but as the conservation of the Old Testament panels will commence in August, viewers must wait around two more years before the entire window is back in place!