The Hand of the Painter? Understanding Medieval Glass-painting Workshop Organization through Scientific Analysis 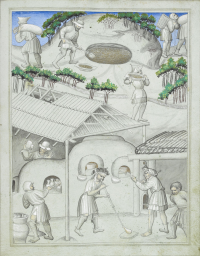 Medieval sources, such as Theophilus Presbyter’s De Diversis Artibus provide information about the tools and technological steps involved in both glass-making and the making of stained-glass windows (see On Divers Arts; Jackson and Smedley 2008 and other works; and Fig. 1). Yet our knowledge about the organization of artistic production within the craft workshops that created windows is more limited.

Chemical analysis has the potential to provide important insights in this area, but analysis is impeded by the architectural context, rendering it impossible to remove samples for laboratory analysis. As an alternative, we must rely on in situ surface techniques, such as hand-held pXRF (portable X-ray fluorescence). This method can be problematic in its application to medieval stained glass, so another key focus of this research was the development of a methodology using hand-held pXRF to study medieval stained glass. 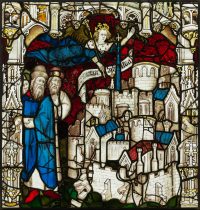 Fig. 2. York Minster, Great East Window, panel 3b after-conservation, depicting the merchants of Babylon mourning its destruction (Revelations XVIII). © The York Glaziers Trust: reproduced with the kind permission of the Chapter of York.

This research benefited from the opportunities provided by one of the largest conservation projects of its kind in Europe, York Minster Revealed, which has entailed the dismantling of the Great East Window (GEW). With the permission of the Dean & Chapter of York and the support of the conservators of the York Glaziers Trust, it has been possible to take samples of cross-sections of glass for laboratory analysis and to analyse them using hand-held pXRF.

Surviving copies of the contract tell us that the GEW was created over a three-year period between 1405 and 1408 by the influential glass-painter of the International Gothic Style, John Thornton of Coventry, and his workshop (French 2003); the window is widely considered Thornton’s masterpiece (Marks 1993). The subject matter is the ‘beginning and end of all things’, with scenes from the books of Genesis and Revelations (Apocalypse). For the pilot study, one panel (3b, see Fig. 2) from the Apocalypse cycle was selected.

Hand-held pXRF has many advantages in the fields of archaeology and cultural heritage: it can be used directly on the surface of an object (Figs. 3a and 3b), allowing the generation of compositional data when it is impossible to take samples; it is far less expensive than other methods of compositional analysis; and it is much faster, allowing more material to be characterized in the time available. Window glass is in many ways ideal for pXRF analysis, as the sample material should ideally be flat, level and homogeneous. The importance of pXRF for the study of window glass has already been demonstrated by the work of David Dungworth and colleagues (Dungworth 2012 and other works).

Medieval glass is the exception however. As Theophilus detailed, medieval glass was made using a recipe of sand and wood or fern ash, resulting in a glass low in silica and high in alkali (potash); this composition makes the glass especially prone to deterioration through the leaching of some elements, in particular potassium, from the surface of the glass (De Bardi, Wiesinger and Schreiner 2013). This can affect surface analyses by pXRF drastically, because the results produced are characteristic only of the surface layer of the glass and, in the case of deteriorated medieval stained glass, are only reporting the composition of the corroded layer.

Fig. 3b. Hand-held pXRF is an analytical device that can be used on site to determine the chemical composition of glass. The spectrometer can be held in the hand (Fig. 3a), which is closer to in situ conditions, or supported on a test stand as shown. 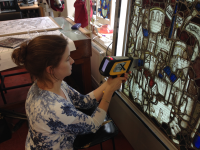 Fig. 3a. Hand-held pXRF is an analytical device that can be used on site to determine the chemical composition of glass. The spectrometer can be held in the hand as shown, which is closer to in situ conditions, or supported on a test stand (Fig. 3b).

The effect that surface conditions have on pXRF analysis varies depending on the element being analyzed, as heavier elements have higher-energy characteristic X-rays that are read from deeper within the glass (Kaiser and Shugar 2012). While the lighter elements calcium and potassium are greatly affected by surface conditions (with results therefore reflecting the deteriorated layer rather than the base glass), the heavy trace elements strontium and rubidium are far less affected. These latter named elements share properties and are naturally associated with calcium and potassium respectively: strontium is introduced into the glass with the calcium-rich raw material, and the same is true for rubidium with potassium. The trace elements can therefore be measured as a ‘proxy’ for the major elements. The methodology for the research carried out by the author was therefore centred around the analysis of these trace elements, as they are easily measured by pXRF and reflect differences in raw materials and technology, as well as chronological and geological sources. A subset of the glass was also sampled for cross-sectional analysis by electron microprobe, which provided high-quality data on the major elements and informed and validated the analyses conducted by pXRF. Analysis of this control group verified that strontium and rubidium define the same compositional groups as calcium and potassium.

The batch is an important concept in the study of workshop practice and organization of production. A batch of glass denotes glass made from a single working pot in a furnace, and consisting of glass that is homogeneous; all the glass objects (in this case, sheets of glass) will be of identical composition and can be identified analytically (Freestone, Price and Cartwright 2009). The batches were identified using trace elements, and verified by the major element compositions of the control group. The spatial distribution of the batches identified by pXRF were then examined and interpreted for organization of production. 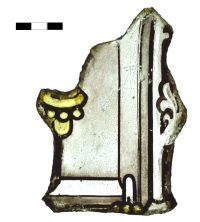 Fig. 4a. A piece of glass from panel 3b; part of the architectural frame. Comparison to Fig. 4b demonstrates the different styles employed to paint the panel. 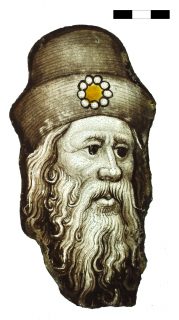 Fig. 4b. A piece of glass from panel 3b; the face of one of the merchants from the central scene. Comparison to Fig. 4a demonstrates the different styles employed to paint the panel.

The spatial distribution of the batches indicated that the architectural frame of Panel 3b was cut and painted separately from the scene it encloses. This could reflect the workflow of a single craftsman, or alternatively that of two or more craftsmen. Other lines of evidence support the latter interpretation and furthermore suggest that this is the work of differently skilled craftsmen, such as an apprentice and a master glass-painter. Certain aspects of windows such as the GEW were ‘stock design features’ that were not unique to a panel or window, but were provided to supplement the individual design requested by the patron (Marks 1993, p. 31). The architectural frames of the main-light panels of the GEW fall into this category: that found in 3b is found in four of the nine panels of row 3.

Visually, the frame is painted with thicker lines and is less detailed than the scene it encloses, bringing the frame into the foreground and contributing to the three-dimensionality of the panel, but it also requires less skill to execute (Figs. 4a and 4b). This, along with the repetition, makes the frame ideal work for a lower-skilled craftsman, such as an apprentice. Supported by art historical and stylistic analysis, the chemical analysis provides potential physical evidence of a hierarchal structure within the workshop, based on skill, experience and reputation.

The new ‘proxy’ methodology of analysing the heavy trace elements strontium and rubidium using hand-held pXRF has significant potential in the study of medieval stained glass. Further development of the methodology is an ongoing focus of the author’s research. The new physical evidence for the hierarchical organization of production within the workshop that created the GEW is amongst the more exciting results to stem from the research undertaken so far, though findings relating to the organization of production and other aspects of the life history of the window (including glass-making and the sourcing of glass, as well as the centuries of post-construction conservation) have been brought to light through this research.

A version of this text appeared in Glass News 40 (July 2016), pp. 1 and 5–6. The report is a summary of research presented at the 20th AIHV congress held in Fribourg, Switzerland, in September 2015, with Ian Freestone and Nick Teed as co-authors, supported by a conference grant from the Association of the History of Glass.

Theophilus, On Divers Arts: The foremost medieval treatise on painting, glassmaking and metalwork, translated from the Latin with introduction and notes by J. Hawthorne and C. Smith, New York, 1979