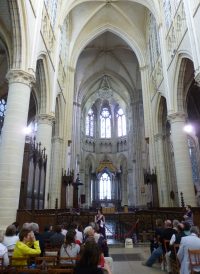 The 28th Colloquium of the Corpus Vitreaum International was hosted by the French CVMA in Troyes on 4–8 July 2016. Troyes, often referred to as the ‘sacred city of stained glass’ (‘ville sainte du vitrail’), provided an ideal location for colleagues and friends within the Corpus to come together to present and discuss recent research. Held in an outstanding venue, Le Centre de Congrès de l’Aube, the colloquium offered a programme of lectures that provided an excellent overview of stained glass found in the residence, encompassing an extensive period spanning the Middle Ages to the twentieth century. A number of scholarships presented by Michel Hérold at the start of the colloquium enabled several students, including myself, to attend the event.

The subject of this year’s colloquium, ‘Stained Glass in the Residence, from its Origins to the Present: Glazing and Decorating the Window’, highlighted a vast and overlooked wealth of material. Both well-established and younger scholars presented on topics that served to underline the burgeoning nature of research within this field of stained-glass studies. Many thought-provoking questions were raised throughout the colloquium; in particular, the nature of the residence in which the glass was located – permanent and non-permanent, public and private, middle- and upper-class – became a recurring issue, throwing into relief the complex and multifaceted contexts of domestic glass. Furthermore, the imagery found within the domestic sphere compared with that seen in ecclesiastical settings was considered, with representations of the divine in profane spaces suggesting a relationship between the glazing of these contrasting contexts that deserves further attention. The craftsmanship and materials of domestic stained glass were also explored. The growing demand for glass-painting in civic contexts in the nineteenth century was seen to have led to the development and widespread use of new glasses and techniques, such as semi-opaque muslin glass, and the emergence of standardized designs provided on an industrial scale. 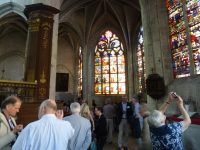 The lectures were accompanied by a carefully conceived programme of site visits that encompassed not only stained glass located in the city of Troyes, but also that found in the Aube départment. The visits were led by experts who provided introductions to each building and its glazing; these served as a useful basis for further discussion on the significance of the glass. The talk by Laurence Riviale on the 1502 window depicting the Triumphs of Petrarch from the church of Ervy-le-Châtel, which formed part of an exhibition curated by Riviale, was particularly engaging. The opportunity to visit stunning buildings such as Saint-Urbain, Troyes, was also a wonderful opportunity for those who had never viewed these sites before. A visit to the cellars of Gremillet champagne was also much appreciated by the attendees.

The event culminated in a day trip to the city of Châlons-en-Champagne and three of its churches: the cathedral Saint-Etienne, the church of Notre-Dame-en-Vaux, and the church of Saint-Alpin. This was a stimulating day and a wonderful end to a thoroughly enjoyable week. We were all most grateful to the French CVMA for hosting such a well-organized and thought-provoking colloquium.

Window on a Parish: Conference Review

On the 25 June, the bustling market town of Ludlow was filled with stained-glass and heritage professionals from near and far, as well as local enthusiasts, for a one-day conference, ‘Window on a Parish: The Stained Glass of St Laurence, Ludlow’. Sometimes known as the ‘Cathedral of the Marches’, the Church of St Laurence has long been recognized for the importance of its stained glass. The windows have a long history of attracting visitors, such as Thomas Dineley, who in 1684 described the building as ‘very fair’ and ‘famous for painted ancient glass windows of curious artifice’. Despite this, as many of the conference’s speakers noted, apart from an initial overview of the windows by Ganderton and Lafond in 1961, precious little scholarship has been carried out.

Organized by the Ludlow Palmers, a charitable trust dedicated to fund-raising for the conservation of St Laurence’s, this one-off event aimed at raising awareness of the importance of preserving the church’s stained-glass windows. Held in the spacious nave of St Laurence’s, it was the perfect opportunity to showcase the latest research into these remarkable treasures, whilst helping to raise essential funds towards their planned conservation. The attendees were warmly welcomed to church by the Ludlow Palmers’ chairman, Hugh Wood (Fig. 1), before the first speaker, Bridget Cherry, set the scene by contextualizing the complex history of the building. She explained the influence of its critical location within the tumultuous borderlands of England and Wales, and demonstrated how changes in political tensions shaped the church over time. The influence of the Ludlow Palmers’ Guild on the architecture was highlighted, whetting the appetite for the following presentations, many of which discussed this theme in more depth.

A fourteenth-century Jesse Tree, one of the earliest windows in the church, was the focus of research by Tim Ayers, of the University of York. He investigated the function of the design within its architectural and liturgical context. Of great interest were the observations made regarding the use of the tree as a genealogical or literary form in relation to the monumental medium of stained glass. The extent to which original glass survives was also assessed, and the analysis of previous restorations revealed a remarkably sympathetic treatment by Hardman & Co. Emma Woolfrey, a doctoral student at the University of York, focused on the medieval catechism windows. By exploring the relationship between image and text she was able to offer insight into the relationship between the laity and the church. Particularly noteworthy were the divisions between lay factions, with the use of Latin in the windows of the Palmers’ Guild Chapel distinguishing the members of the guild from their contemporaries.

The choice of narrative glass commissioned by members of the guild was expounded by Christian Liddy of the University of Durham. By presenting a new interpretation of the Palmers’ Window, he offered fascinating insights into its possible functions, particularly in relation to the construction and enforcement of the guild’s identity through the careful selection of iconography. The more recent stained glass, dating from the nineteenth and early twentieth centuries, was discussed by Dr Jasmine Allen, curator of the Stained Glass Museum, Ely. Her talk shed light on the themes, styles and makers represented, placed within the wider context of developments throughout the period. This inspired a greater appreciation of the more recent windows, which may sometimes be overshadowed by the wealth of medieval glass in the building. Finally, the theme of restoration was revisited by Sarah Brown, Director of the York Glaziers Trust, who made a broad examination of the restoration history of the windows. A useful summary of factors having an impact on the current condition of the glass was given, highlighting important considerations for future conservation work. This neatly brought us back to the key aims of the conference: a better understanding of the glass and the importance of its preservation for the future.

Anyone interested in finding out more about the conservation work, or assisting with fund-raising efforts can find out more on the Ludlow Palmers’ website. 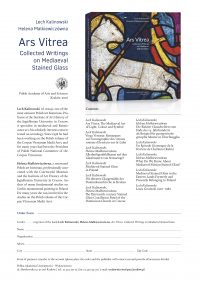 Lech Kalinowski (d. 2004) was one of the most eminent art historians in Poland in the twentieth century. He was a specialist in mediaeval and Renaissance art, and his scholarly interests concentrated on iconology. He began work on the Polish volume of the Corpus Vitrearum Medii Aevi in 1958 and for many years was the president of Polish Corpus Vitrearum. A number of his writings on glass, in English, French and German, have recently been brought together in a volume entitled Ars Vitrea: Collected Writings on Mediaeval Stained Glass. Some of the pieces are co-authored by Helena Małkiewiczówna, a Polish art historian associated with the Czartoryski Museum and the Institute of Art History at the Jagiellonian University in Cracow, and author of a number of studies on Gothic monumental painting in Poland. Copies of the book are now available to order from the publishers (download the flyer on this page).

Exhibition: The Splendour of Light – Christopher Webb and the Windows of St Lawrence Jewry

The windows at St Lawrence Jewry made up the largest of his schemes and in many respects represented a culmination of his prolific career in stained-glass design and manufacture. 2016 is the 50th anniversary of Webb’s death and a good time for a re-assessment of his achievements. While his work has retained its popularity in many of the church communities whose buildings house his windows, it has often been damned with faint praise by architects and other critics for its apparent conservatism and lack of adventurousness. 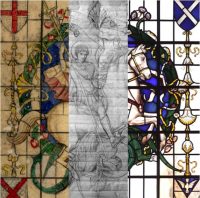 Fig. 1. The Splendour of Light – Christopher Webb and the Windows of St Lawrence Jewry.

This exhibition puts Webb’s commission as part of the refitting of St Lawrence Jewry after its destruction in the blitz of 1940 in the context of his development as an artist over the previous three decades. It also uses copies of original sketches and full-size cartoons from the collection of his son John Webb to show how designs for individual windows changed, sometimes very significantly, during the commissioning and approval process. In the almost complete absence of written records for this project, the sketches and cartoons provide a fascinating and unusual insight into Webb’s ideas and the ways in which they were modified by input from other interested parties. For example, in the original scheme one window was to have been a portrait of the Queen. In spite of the attractive sketch prepared by Webb, this proposal was abandoned. Fortunately, the sketch survives, and a copy is included in the exhibition.

The sketches and cartoons have not been seen outside the Webb family since Christopher Webb’s death in 1966. Many of the sketches, while showing signs of their practical use in making the windows, are miniature works of art in their own right, and the cartoons, fragile as many of them are now, demonstrate Webb’s skill in draughtsmanship. The exhibition will be accompanied by a comprehensive catalogue and concludes with pointers to other Webb windows in and around the London area.

A launch event for the exhibition will take place at SLJ at 5.30pm on Monday 3 October 2016 with two or three brief presentations. This is open to all – no need to book.

A reminder that booking for this year’s Icon stained-glass group AGM and conference is now open, and that proposals for papers are still being accepted. The theme of the conference is ‘Disaster! Management, Recovery, Reconstruction, Opportunities’, and there will be papers, an opportunity to visit the Canterbury conservation studio, and site visits to view glass by Marc Chagall and Charles Marq, as well as by the eighteenth-century glass-painter William Price the Younger. Full details were published in last month’s Vidimus.

Five student bursaries are available to cover the full cost of a student ticket (including the Saturday coach tour). These are open to current students and individuals undertaking relevant unpaid work experience. Please email Katie Harrison, detailing how you would benefit from attending and including contact details for a referee, and (where applicable) your institution, course and year of study. The deadline for applications is 14 August 2016.

Students are invited to submit titles for our first Student & Emerging Professional Poster Competition. Entries will be on display throughout the first two days of the event. Posters will be judged by delegates, and three cash prizes will be awarded. Posters may be on a current project or case study, or on the conference theme, and will be judged on effective communication and the visual impact. If you would like to submit a poster, please email Katie Harrison, including your name, title and brief outline (max. 200 words) of your poster), and your institution. The deadline for submissions is 31 July 2016.