2014 saw the 850th anniversary of the consecration the cathedral of Saint-Étienne at Sens, and this volume was produced as part of those celebrations. It gives a brief introduction to the building and its history by Bernard Brousse, a specialist on the cathedral, followed by a five-page article on the history of the glass by Françoise Perrot of the Centre National de la Recherche Scientifique; Claire Pernuit follows this with consideration of the thirteenth-century windows, giving a full-page colour illustration of each one, together with selected details and a panel by panel description of the window. Bernard Brousse then gives similar treatment to the sixteenth-century windows. A plan showing the windows of the cathedral, based on that used by the French CVMA, is given, followed by complete photographic coverage in smaller colour images of every window, including those of the nineteenth century. A bibliography lists works on the cathedral and on its glass, as well as selected iconographic works and notes of relevant archival sources. An index is also provided. 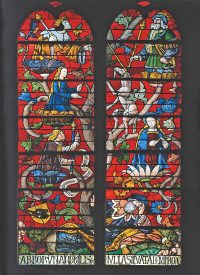 Of particular interest to me was the early thirteenth-century Becket window. Becket was at Sens in 1164 and again, in exile, from 1166 to 1170, before his return to England and martyrdom. Some of his vestments are preserved at Sens, hence, perhaps, the presence of a window devoted to his story. Other early thirteenth-century windows are devoted to the parables of the Prodigal Son and the Good Samaritan, and the story of St Eustace, and these make interesting comparison with similar windows on these subjects at Bourges and Chartres. Of the sixteenth-century glass I was especially struck by the splendid images of the early sixteenth-century Jesse Tree window [fig. 1].

I was particularly keen to see this volume, since when I visited Sens in 1992 to photograph the early glass, almost all of my slides were ruined by the processing laboratory! It is therefore even more of a pleasure to note that the photography by Antoine Philippe is of a very high standard. The whole volume is exceedingly useful, either as a stand-alone guide to the glass, or as a supplement to the entry on the Sens glass in the 1986 French CVMA recensement volume (III: Les Vitraux de Bourgogne, Franche-Compté et Rhône-Alpes, pp. 177–88), providing excellent coverage of the early glass in colour. The work is excellent value, and may be secured even more cheaply on Amazon.