Feature: ‘Magnificent and Sumptuous’: the Glazing of Brereton Hall, Cheshire

‘Magnificent and Sumptuous’: the Glazing of Brereton Hall, Cheshire

The following article was originally presented by Dr Penny Hebgin-Barnes of the British CVMA as a poster at the 28th International Colloquium of the Corpus Vitrearum on the theme of ‘Stained glass in the residence, from the origins to the present’, held in Troyes in July 2016.

The reign of Queen Elizabeth I (1558–1603) saw an outburst of country house building in England. One such house was Brereton Hall in Cheshire, an imposing brick mansion with octagonal twin towers flanking an entrance arch in the centre of its nine-bay main front, which bears the date 1585 [Fig. 1]. Although it is not as renowned as the great Elizabethan prodigy houses such as Longleat and Burghley, Brereton was described by the sixteenth-century antiquary William Camden as ‘magnificent and sumptuous’, and was noteworthy for an impressive display of domestic adornment. Its window glazing, plasterwork, overmantels and carvings exhibited not only a wide variety of heraldry evoking not only local families and European rulers, but also figures from Cheshire history, Renaissance ideas, and proclamations of loyalty to the crown. Despite the loss and relocation of some of the glass and other fittings, the scope and ambition of the original scheme can still be appreciated.

The Hall’s builder Sir William Brereton (1550–1630) was the head of a wealthy Cheshire gentry family and served as High Sheriff and Member of Parliament. He was a loyal servant of Elizabeth I, as is demonstrated in the Withdrawing Room [Fig. 2], which contains a stone overmantel [Fig. 3] displaying her arms and the date 1585 [Fig. 4], with the globe of the heavens above. Around the room runs a magnificent plasterwork frieze displaying shields of forty-three European states and principalities. Each shield is set beneath a crown and accompanied by the title of its ruler in Latin on a scroll that curls around both a white and a red rose [Fig. 5]. The kingdoms include Jerusalem, of which Philip II of Spain was then titular king; its shield is surmounted by the crown of thorns. 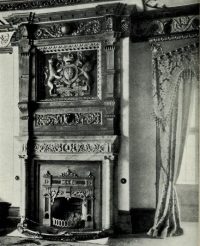 Several other overmantels are decorated with Brereton family armorials, and the cornice above one staircase displays the painted shields of many Cheshire families [Fig. 6]. It is recorded that the windows originally contained 330 shields of the English nobility and Cheshire gentry, the equivalent of an extensive roll of arms. The fondness for heraldic display, which had gathered pace during the fifteenth century, reached its climax at this period. At least some of the money and energy that would formerly have been expended on religiously themed glazing were channelled into heraldic schemes, as is evidenced by the series of armorials of the English nobility set within garters or chaplets that were produced for grand Cheshire houses of this period. The remains of a fine series from Vale Royal Abbey are now in the Burrell Collection in Glasgow, and those of another survive at Lyme Hall.

After the Brereton family died out, most of the Hall’s surviving glazing was removed to Stoneleigh Abbey in Warwickshire, where one large window contains thirty-two armorials, including those of the Queen [Fig. 7] and nine Knights of the Garter, plus sixteen smaller armorials of more humble gentry families from north-west England. These sixteen came from a series of at least thirty, thirteen of which are now the only original glazing remaining at Brereton [Fig. 8]. Most of these attractive little heraldic panels bear the date 1577, and each displays the name of the family who bore the shield and a range of Renaissance motifs, principally cartouches, putti, fruit and flowers. The series demonstrates that by this period glass-painters were not only entirely familiar with the vocabulary of Renaissance decoration, but could combine its various elements with assurance in convincing ensembles. It is clearly influenced by the extravagant ‘Floris’ style of ornamentation characteristic of Antwerp decorative work of the mid-sixteenth century, as exemplified by the series of windows formerly in the convent hospital of St Elisabeth in Lier; many of their motifs and forms are copied at Brereton. The larger, grander armorials now at Stoneleigh are slightly later in date (1584). All these shields consist of multiple quarterings recording their bearers’ ancestry and are set within garters or chaplets adorned with elaborate clasps displaying classical motifs, such as grotesque heads [Fig. 9]. 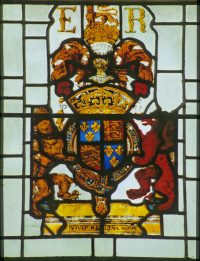 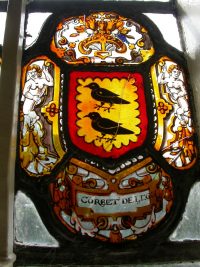 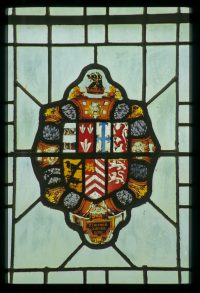 However, the most interesting glass now housed at Stoneleigh is a series of late-sixteenth-century panels that depict the seven independent earls of Chester and two earls of Mercia. Each earl, identified by an inscription, is shown standing beneath a decorative arch, brandishing a drawn sword and wearing armour, a coronet, and a surcoat emblazoned with his arms [Figs 10, 11]. Their martial appearance in full regalia highlights their role as patrons and protectors of Cheshire in much the same way as St George was represented as England’s patron. Their original position at Brereton Hall is not recorded, but it seems likely that this grand parade of local potentates was commissioned by Sir William Brereton for the Withdrawing Room, which with its frieze and overmantel was the finest room in the Hall. The earls were certainly in the bay window of the Withdrawing Room in 1808, when an engraving of them was published by William Fowler, a celebrated artist of the period whose images did much to publicise a variety of historical artworks, including stained glass [Fig. 12].

It may be significant that below the royal arms on the Withdrawing Room overmantel is the badge of a wolf’s head issuing from a ducal coronet. The wolf’s head was the emblem of Hugh Lupus (d.1101), 1st earl of Chester [Fig. 10]. To keep control of the distant and potentially rebellious northern regions of England, the Norman kings delegated some of their royal powers to trusted local deputies. Thus William the Conqueror granted the County Palatine of Chester to Hugh Lupus, making him and his heirs independent rulers of Cheshire until the death of the last earl in 1237. The earldom of Cheshire was then annexed by the crown and the title was conferred on each subsequent monarch’s heir apparent. But the distinct identity the county had once enjoyed thanks to its semi-autonomous rulers was not forgotten. This may account for the continuing and widespread regard for the earls of Chester in fifteenth-century Cheshire, attested by the popularity of genealogies, which formed part of a common corpus of what has been described as ‘Earl literature’ circulating in the county in the later Middle Ages. 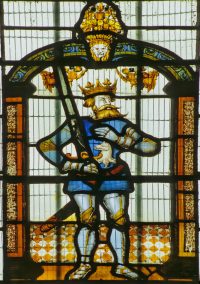 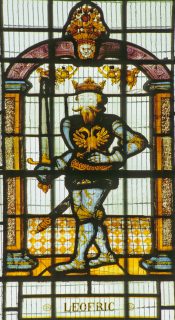 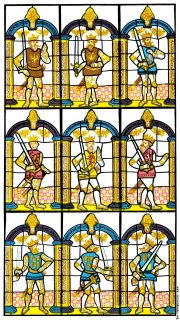 Fig. 12. Fowler’s engraving of the earls at Brereton Hall

The celebration of the earls was not confined to literature, as evidenced by three recorded examples of their depiction in Cheshire glazing that predate the Brereton series. A sixteenth-century sketch shows a king and three earls in an undated window of Chester Abbey (now Chester Cathedral), which Hugh Lupus had founded and his successors had endowed. Another series was commissioned in the late fifteenth century by Simon Ripley, abbot of Chester, for his abbatial residence at nearby Saighton. The shields of all seven earls appeared over the high altar in Eastham Church, perhaps in a lost window of 1543 that may also have contained images of them. These three examples provided a precedent, but the Brereton series was unique in adding Leofric [Fig. 11] and Leofwine, two eleventh-century Saxon earls of Mercia. Although they were sometimes described as earls of Chester (since Chester was the head of the earldom of Mercia), it was unusual for them to be grouped with the other seven earls. Their inclusion was perhaps designed to bring the total number of earls to nine, in order to draw a parallel with the Nine Worthies, a collection of heroes from history and legend that included Alexander the Great and King Arthur. The Nine Worthies were a popular subject in literature, art and pageantry during this period, appearing in Shakespeare’s play Love’s Labours Lost in the 1590s. The association of the Cheshire earls with these celebrated paragons of chivalry could only enhance their reputation and that of their native county, which Sir William Brereton celebrated in his residence alongside the rulers and nobility of his own era.

The hierarchy of Elizabethan England was eloquently expressed on the Withdrawing Room overmantel [Fig. 3], with the royal arms of England placed below the celestial sphere but above the badge of the earldom of Chester. Below the badge was the crest of Sir William Brereton himself [Fig. 13], representative of the county gentry who upheld the status quo at local level.

The parlour (now the kitchen) at Brereton Hall was also decorated, albeit in a humbler style than the Withdrawing Room, as befitted its more homely function. Its walls were set with panels bearing carved cartouches inscribed with homilies. One that remains over the fireplace bears the injunction: ‘Doe nothing this day wherof thou mayest repent tomorowe. Knowe him well whom thou makest of thy councel lest he bewray thy secret’ above a moor’s head spouting foliage [Fig. 14]. The sophistication of the design is undermined by its rather clumsy execution, but it has a vigorous if naive charm. Similar but less ambitious contemporary examples of moralising texts survive in stained glass, for example at nearby Gawsworth Old Rectory, where four small diamond-shaped quarries display cartouches within which are set Latin mottoes including ‘Præcipitis consilii[s] assecta poenitentia’ (‘Repentance is the follower of hasty counsel’) and ‘Murus æneus sana conscientia’ (‘A healthy conscience is a wall of bronze’) [Fig. 15]. It is not recorded whether the windows of the Brereton Hall parlour ever contained such glazing.

While Stoneleigh Abbey has found a twenty-first-century role as a tourist attraction and corporate venue, Brereton Hall is one of the declining number of historic country houses still in private ownership. Although the current owner has done a fine job of converting it to a comfortable family home while retaining its unique historic decorative features, it has now been on the market for a considerable time. This is hardly surprising in the ongoing depressed economic climate, since there cannot be many families seeking a twelve-bedroom house in a rural location far from London who can afford the £4,950,000 asking price, together with the limitations imposed by its Grade I listed status, but it would be a pity if this distinguished residence becomes a magnificent and sumptuous white elephant.

The author is grateful to the current owner of Brereton Hall for access to the glass; to the agents Jackson-Stops & Staff for use of the images; and to Gordon Plumb, who photographed the panels at Stoneleigh Abbey.