Fig. 1. The east wall of the Old Library from the Mob Quadrangle.

Founded in 1264, Merton College, Oxford was among the first academic colleges established in England, and arguably one of the most significant. It provided a model for later foundations, and by the fourteenth century, its alumni populated the highest levels of church and state. At the heart of the college, filling the west and south sides of Mob Quadrangle, is the fourteenth century building of the Old Library (Fig. 1.). Although one of the oldest and largest medieval libraries in the country, housing a collection of international significance, Merton Old Library is not just a treasure house of rare books and artefacts, it is also renowned for its scheme of 39 stained glass windows, which are the remains of the oldest surviving scheme of glazing for any English library (Fig. 2). The windows of the Old Library are predominantly single lancet lights, which contain an assembled collection of glass ranging from medieval times to the early twentieth century. The majority of the glass belonging to the original scheme of glazing is now situated in the seven lancets of the library’s eastern wall (eI –eVII). 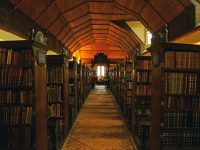 Fig. 2. The interior of the Old Library.

The single lancets in the library each illuminate a bay of bookshelves and a reading bench, and the notably translucent glazing has afforded light for readers for hundreds of years. Originally these single lancets were also fitted with shutters to the interior, evidenced by the iron pins, which can still be seen on many of the windows. The seven lancets of the eastern wall containing the remains of the original glazing are each filled with painted quarries, set within composite borders of various designs, and each features a boss in the central upper section. The glass in each lancet now takes the form of a single panel, and it is impossible to know whether any of the glass is in its original opening. Nonetheless, in four of the lancets (eI, eII, eV, eVII), the boss depicts the agnus dei, with the inscription (in Latin) of the Baptist’s words, ‘Behold the Lamb of God’: an image evoking the college itself, given the dedication of Merton’s chapel to St John the Baptist. 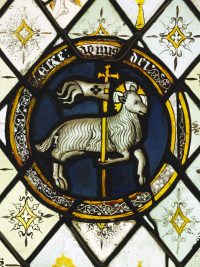 Vidmus readers will be familiar with the image of the agnus dei at Merton as it features on our homepage. This image – the lamb set against a red background – is from window LW eII, the neighbour to the right of window eI, the subject of this feature. LW eI contains the agnus dei against a blue field (Fig. 3) in a circular boss within a decorated frame bearing the inscription ‘Ecce:/agnus/ dei.’ The cinqefoil-headed panel is a fascinating composite of original glass dating to the last quarter of the fourteenth century and contains seven types of quarries; two original varieties; two of a similar date and three varieties of later insertions (late 15th/early 16th-c), along with restoration pieces (Fig. 4). The original quarry designs derive from luxury fourteenth century silk patterns, and lion masks (Fig. 5). The border is made up of four different designs and contains the letter ‘M’ in the bottom left corner (Fig. 6). Interestingly, this piece was moved to this panel during the restoration which took place in c.1935, and was previously in window LW eV (see Ayers, 2013, page 415). The border pieces are of four different serpentine designs.

LW eI has recently been conserved by The York Glaziers Trust and reinstalled with protective glazing as part of a conservation trial instigated and organised at the behest of Dr Julia Walworth, Fellow Librarian at Merton College. Dr Julia Walworth, who holds responsibility for the library, has worked closely with York Glaziers Trust. The Warden and Fellows of Merton have kindly given permission for the use of the images illustrating this feature. 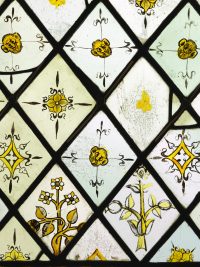 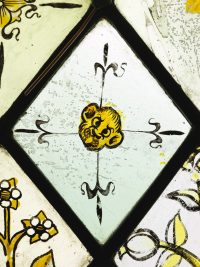 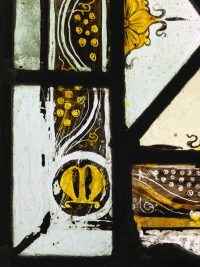 During the conservation process, Vidimus was given privileged access to the studios of York Glaziers Trust to see the magnificent stained glass panel at close quarters.

Merton College has a long tradition of caring for its glass, and window eI has been previously conserved. The panel was restored and re-leaded by Samuel Cauldwell in the 1930’s and it is believed that at this time the present arrangement of the panel was configured. Broken pieces, quarries, border sections and parts of the decorative edge of the boss were edge-bonded and re-glazed with protective backing plates. Newly painted quarries and border pieces imitating the medieval originals were inserted; these pieces are of a yellowish tint, the paint is thinner and the stain paler than the medieval pieces.

The window was removed at the beginning of the second world war along with the other lancets of the east side of the west wing and sixteenth-century glass in the eastern oriel window of the south wing and appears to have had no further work carried out on it since its return to the Old Library after the war. 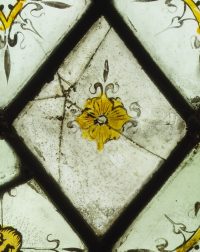 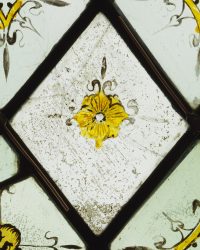 When the panel was removed from the window for its most recent conservation, the lead was unsurprisingly found to be stable and structurally sound. The lead was left as found and the glass, which is in good condition and, with the exception of the corroded blue pieces in the boss, retains its glassy surface, was simply lightly cleaned to remove surface dirt and grime, resulting in an increased transmission of light. Numerous edge-bonded repairs from earlier conservation endeavours were found throughout the panel. While some of these cracked pieces remained stable, the adhesive – likely an animal glue – had largely failed and many of the bonds discoloured and deteriorated, causing the pieces to have become misaligned (Fig. 7 and Fig. 8). Conservators have repaired these breaks with conservation grade epoxy resin, rendering them almost invisible (Fig. 9 and Fig. 10). In each case, the damaged pieces of glass were removed individually from the surrounding lead, as the lead matrix was kept intact. Once bonded, these pieces were placed back into the lead. This strengthened the pieces, eliminating the risk of loose fragments working free and falling, and greatly improved the appearance of the previously repaired sections (Fig. 11). 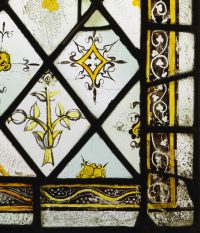 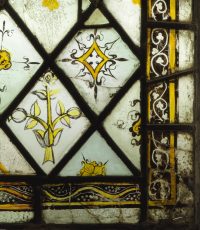 The panel has now been returned to the window with protective glazing as part of a trial conservation campaign that will safeguard the glass from future environmental deterioration.   Significantly, the internally ventilated system of protective glazing that has been implemented removes the weather-shield function of the window, protecting the glass from the elements and guarding against compositional decay, further paint loss and deterioration caused by environmental factors, as well as providing a physical barrier against missile damage.  This will halt the onslaught of paint loss by allowing air from within the building to circulate around both the inner and outer faces of the stained glass, therefore maintaining an even temperature and inhibiting the formation of damaging cycles of condensation on the historic glass.  Several quarry pieces in window LW eI have already lost their glass paint, leaving only the silver stain, and protective glazing will prevent further loss from occurring across the window.  York Glaziers Trust have also installed monitoring devices as part of the conservation trial, and will be gathering data on the protected and unprotected stained glass in this unique building to inform the future conservation approach to the windows in the library.

Notably, the protective glass that has been used is Lamberts Restauro UV(c) glass. This glass is mouth blown in the traditional way, so is aesthetically congruous with the medieval glass in the window but as it completely blocks the transmission of UV light, innovatively provides the added benefit of the protection of books, manuscripts and other photosensitive materials in the library, crucial to their conservation and longevity.