The Coat of Arms of John Charles Brooke. Somerset Herald.
Painted in enamels by Jacob Wright of Leeds fl. c.1775-1814[1] 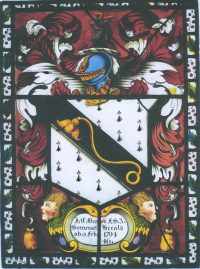 In the reserve stock at Cartwright Hall Museum, Bradford, are three armorial panels painted by the Leeds enamel glass-painter Jacob Wright. The panels were formerly in store at Bolling Hall Museum, Bradford together with other panels by the York glass-painters Henry Gyles (1645-1709) and William Peckitt (1731-1795). The panels were inspected and photographed in the 1960’s by the noted glazier and glass historian Denis King OBE, FSA., of Norwich, who notified J. Trevor Brighton who was conducting research for his doctoral thesis on The Enamel Glass-Painters of York 1585-1795 [2]. He, in turn, notified the present writer, who in addition, received  a black and white photograph of all six Bolling Hall panels kindly sent by King in July 1966.

All three of the armorials by Wright are treated in a slightly unusual way. The arms are displayed on an angular shield set against a densely coloured red/orange background with a narrow white border bearing green leaves and red berries. Of these three panels, one is of particular interest [fig. 1]. It bears the arms of John Charles Brooke, Somerset Herald: Ermine on a bend sable a hawks lure or. Crest: a goats head per fess proper and gules armed or. In a cartouche below the shield and flanked by two outward-facing, winged cherubs heads (a feature borrowed from Henry Gyles), the inscription:

John Charles Brooke was the second son of William Brooke M.D. and Alice, the daughter of William Mawhood of Doncaster. He was born in August 1748 at Frierhead near Dodworth in the parish of Silkstone near Barnsley in South Yorkshire. Brooke was a descendent of the Reverend John Brooke, the antiquarian rector of High Hoyland, from whom he gained an interest in, and material on, the history of Yorkshire. As Somerset Herald he did a great deal of work on Yorkshire genealogy and he provided Peckitt and Wright with blazons of arms taken from the records in the College of Heralds. Peckitt responded by painting his coat of arms free of charge- now lost.[3]

Brooke died in a rather bizarre way. He, together with Benjamin Pingo, York Herald, and fourteen others were crushed to death on the third of February 1794, by a crowd of people attempting to get a glimpse of King George II whilst he was attending a performance at the Haymarket theatre, London. 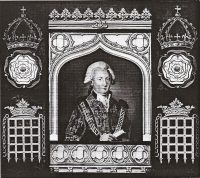 The portrait of Brooke [fig. 2], painted on glass, now in a window (fig.3) in the entrance hall of the College of heralds, London, was attributed to Peckitt by Sir Anthony Wagner in 1967, but it is unlike other examples of Peckitt’s work, and may be by Jacob Wright.[4]

Wright appears to have been born in Leeds. Research on his early life has yielded little compared with that of Gyles and Peckitt. No written record of his work has come to light, so he has, to some extent, escaped the attention of scholars working in this field of study. What is known has been culled by the writer from various sources and newspaper cuttings.

On the death of Peckitt in 1795, or possibly earlier, The City of York commissioned Wright to paint the Royal and City Arms and other heraldic glass for the Guildhall, all now lost.[5] Other commissions followed: two armorials were added to Peckitt’s Great East window at Ripon Minster – now in the Library east window; the coats of arms of Archbishops Harcourt and Markham were put up at Bishopthorpe Palace; thirty-nine armorials of the Dean and Chapter in the library window at York Minster were completed in 1809; and an image of St. Peter saved from the old church and now in a south nave aisle window at Leeds Minster is signed and dated J. Wright 1811. As late as Saturday, July 24th 1813, Wright was advertising for work in the Leeds Mercury, where he gives his address as Mid-street, Meadow Lane, Leeds – not far from the parish church. He advertises the fact that ‘He PAINTS and STAINS GLASS in the real vitrified Colours: Historical Subjects, Coats of Arms, Roses, Gothic Ground Work, and borders to any Width or Pattern. Old Stained Glass Windows damaged by Time or Accident, he can make complete, so that the best Judges cannot perceive the difference’.

Six months later the following appeared in the Mercury dated Saturday, 26th February 1814, ‘The benevolent consideration of the public is solicited to the deplorable Case of Mr. Jacob Wright of this Place, Painter and Stainer on Glass’. It goes on to explain that Wright had lost the sight of one eye early in life, and that, ‘a few days ago a Splinter from a Piece of Wood struck his remaining eye and blinded him’. Subscriptions for his support were asked for and a list of seventy-seven subscribers was published, including the Archbishop of York, the Earl of Harewood, Sir John Beckett, Walter Fawkes of Farnley, and John Haddon, vicar of Leeds. Wright must have died shortly afterwards, presumably as a result of some complication following the accident, for a meeting was called at the Court House on Wednesday, May 4th 1914, ‘to consider the best Mode of the disposing of the funds’, which amounted to the sum of three hundred and thirty nine pounds and five shillings.

His untimely and tragic death at what appears to be no more than his middle age, deprived the North of England of a talented and well respected glass-painter at a time when so few were employed in the trade in the years before the revival of glass-painting in the Victorian era.