Feature: The Conservation of “An Episode of the Legend of the Seven Sleepers” Medieval Stained Glass Panel from Rouen Cathedral

As a part of Worcester Art Museum’s Autumn 2016 reinstallation of its Medieval Galleries, a panel of stained glass, originally from Rouen Cathedral, now belonging to the museum, illustrating an “Episode of the Legend of the Seven Sleepers of Ephesus, was treated with the primary goal of improving its readability after having been misaligned for at least two centuries. The panel dates to 1200-1210 and is an exemplary representation of the artistry of this early period. Moreover, it captures a story uncommonly portrayed in stained glass, in which seven Christians (three depicted here) are religiously persecuted in the Roman Empire, subsequently sealed away in a cave, and fall into a deep slumber for hundreds of years. When the sleepers awaken, they learn that the empire has accepted Christianity and come before the new emperor, King Theodosius II, to proclaim their miraculous story which they can attribute only to Christ. By returning the panel’s imagery closer to how it was originally intended, this panel can now be more fully appreciated as a rare and exceptional example of its time. 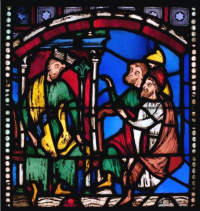 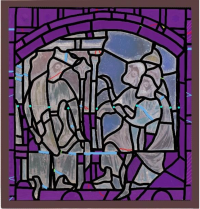 Purpose of the Restoration

The panel was brought to the museum’s Fuller Conservation Lab to assess its condition and the impact of previous restoration campaigns. Steps were taken to differentiate original materials from previous restoration inserts, including revisiting a previously recorded restoration chart, visually examining inconsistencies in both the imagery and materials with art historian experts in medieval stained-glass, and comparing the elemental composition and surface characteristics using scientific analytical and photographic imaging techniques. Equally important, action was taken to ensure the panel’s structural stability for permanent display and to preserve as much original material as possible.

When the panel was brought in for conservation, the visual disfigurement was primarily noticeable along the panel’s lower quarter—a hand was dislocated from its wrist, the base of a column was misaligned, a leg’s calf did not sit under the corresponding knee, and the drapery and lead lines were offset. In his 1986 article, The Seven Sleepers and the Seven Kneelers: Prolegomena to a Study of the ‘Belles Verrières’ of the Cathedral of Rouen, Michael Cothren created a grayscale rendering that excluded restoration pieces identified by Corpus Vitrearum and visually shifted the bottom quarter of the window to aid in deducing the overall lancet format and design to which the panel once belonged (Fig.3). In his article, Cothren concluded that the overall lancet was composed of circular medallions in quadrants that meet with an ornamental grouping (1). While the rendered shift seems logical in a grayscale diagram, the colors and lines of the drapery do not quite align properly (Fig.4). Still, Cothren’s conclusion of the lancet design remains unaffected by this difference and aids in understanding the original context and visual composition of Worcester Art Museum’s panel. 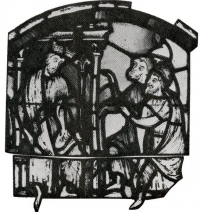 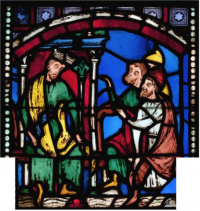 Fig. 4. General translation of Cothren’s rendering from grayscale to colour.

Given that the dimensions of the overall panel after conservation were to remain the same, any shift would require some materials to be sacrificed. Therefore, determining an appropriate shift that would improve readability with minimal intervention was crucial. Representatives from the American Corpus Vitrearum—Ellen Shortell, Madeline Caviness, and Virginia Raguin—were consulted to re-examine and update the window’s previous restoration chart and to help devise a treatment plan (Fig.5). Their knowledge and connoisseurship of medieval windows, in addition to this writer’s examination and scientific analysis findings through visual examination, X-ray fluorescence spectroscopy (XRF), and Reflectance Transformation Imaging (RTI), provided greater clarification in identifying original glass from restoration glass, as well as deciphering the disfigured composition. XRF is a noninvasive and nondestructive analytical technique that provides qualitative and semi-quantitative data of the elemental composition and a general indication of the quantity of the elements. RTI is an imaging technique that can enhance surface details and characteristics, such as, texture under different lighting conditions (Fig.6). 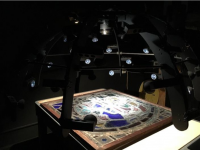 Fig. 7. RTI images capturing the paint strokes of three different feet. Inconsistencies appear to be due to deterioration and may suggest a restoration campaign.

These resources and techniques helped identify restorations for documentation purposes and influenced treatment decisions, particularly determining which pieces of glass would be cut and/or relocated. For example, the blue glass on the lower proper left side appears machine-made, with an evenly flat surface, regular imparted striations, and is noticeably a lighter blue compared to the blown blue glass in the centre that is slightly undulating and smooth. In addition, RTI helped capture differences in the quality of paint strokes. While some glass of similar colours and texture appear consistent with other original pieces and have similar elemental composition, shown with XRF (Fig.7), the paint appears inconsistent. Indeed some paint differences are due to deterioration, but other inconsistencies seem to indicate that the glass was repainted and fired in a later restoration. In another case, the seat elements to the right and left of the king are visually similar in colour, but are painted differently. All seat elements are recognised as restorations by Corpus Vitrearum. While in colour and paint quality, the purple seat pieces to the far proper right are similar to each other and the purple seat pieces at the centre are similar to each other, the two groups have different elemental compositions, which suggest separate restoration campaigns (Fig 8). 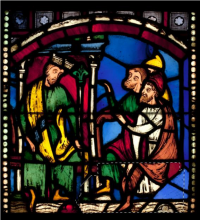 Fig. 9. Dotted white area highlights area selected to be shifted and where cuts will be executed. 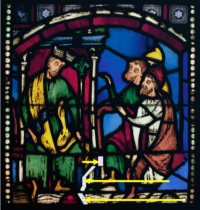 Fig. 10. General rendering of panel after shift. White areas in the centre are gaps expected after shift, and yellow areas indicate the sources of old restoration glass pieces to be used to fill these gaps.

With the information gathered through examination and analysis, a plan of action to clarify the imagery with minimal intervention could be developed. One-to-one photo printouts of the panel were cut out to simulate possible treatment solutions, where the lead network might be accessed, and which glass pieces could be cut or shifted. The decided plan of action focused on aligning the lower proper left section and improving the muddled lower centre area between the king’s left leg and the hatless sleepers’ leg (Figs. 9, 10).

Overall, the stained-glass panel was in fairly good condition. Only minimal structural treatment was performed as most conditions did not endanger the stability or aesthetic integrity, and the window would be displayed in a controlled environment. The only structural issues addressed were improving the framing and support bars to reduce the probability of the panel buckling under its weight.

First, the panel, which had been fixed to a wooden frame with cement and picture nails, but no rabbet, was released. The cement was reduced by first lining it with 3M ScotchBlue Tape to protect surrounding surfaces and then applying Savogran Strypeeze Paint Stripper to the cement with rolled cotton swabs. The softened cement was removed mechanically with a scalpel and cleared with acetone and Kimwipes. Nails were removed mechanically with pliers and a hammer. The lower support bar on the back was removed temporarily. After the panel was released, a rubbing of the lead network was created. The glass was then lightly surface cleaned with 1:1 deionized water/ethanol and rolled cotton swabs to reduce light dust and dirt. Next, steps were then taken to improve the alignment of the imagery as previously simulated with the printed cutouts. Select solder joins were cut with a glazier knife to separate the section that would be shifted. The lead hearts under the cut solder joins were removed with snippers so that the detached section would be able to smoothly shift. The detached section was then positioned so that corresponding lead cames and paint strokes were continuous (Fig.11).

Fig. 11. Detached section shifted for alignment to improve the continuity of paint strokes and lead lines.

A select number of old restoration pieces were resized and/or relocated to either accommodate the shift within the constrained panel dimensions or to fill a gap if it clarified the imagery and was aesthetically cohesive to the surrounding and overall composition. For example, some pieces previously trimmed from the lower proper left side were reused in the centre gap. Some of these pieces were copper foiled to other restoration pieces if they were of comparable colour, painting styles, and elemental composition. For example, the juxtaposition of the purple pieces in the centre visually clarifies the continuation of the seat of the throne. Copper foiling allows ease of reversibility and a visual continuity with a thin solder line, as well as, a distinct separation to acknowledge that the pieces were not originally a single piece. New glass inserts were added in two locations—one was copper foiled to a column to fill a gap and a green piece of glass replaced a purple piece to visually continue the green drapery of the king’s left leg (Fig.12). The latter was exchanged by cutting into solder joins that surrounded the piece on the back and flipping the flanges up to access the glass. After replacing this piece, the flanges were flipped back down and the joins were soldered. All new inserts were toned or inpainted with Golden Acrylic Paints and scored on the back “WAM2016”. The majority of the lead was preserved or trimmed to adjust to any resized glass. Lead of matching profile to the existing lead was added to secure glass in the centre gap and for a small lead fill at the base of the column. The panel was then glazed (Fig.13). Some fragile lead joins were reinforced with copper mesh. All new lead and solder joins were darkened with Novacan Patina for Lead and cotton swabs. Light leaks were puttied with a spatula from the back with Atlas Wonder Putty Window Glazing Compound toned with Golden Acrylic Paints. 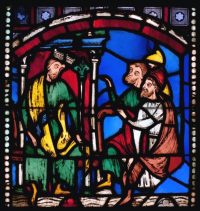 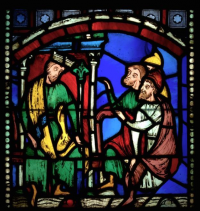 Lastly, the panel was fitted back into the frame and provided a stronger framework on the back to to reduce buckling. The lower support bar was reattached with copper ties that were soldered. Poplar wood rabbets were fabricated and added by Preparator/Exhibitions Carpenter, Trevor Toney, and carefully drilled into the pre-existing frame. Notches were also created to the rabbet to catch the support bar. The gap between the frame and poplar backing was filled with black Volara Foam and adhered to the frame with 40% Paraloid B-72 in acetone. This added support effectively strengthened the structural integrity of the panel, allowing it to be safely displayed and easily accessible if needed in the future.

Overall, the treatment goals were met. Minimal intervention, which maintained as much original material as possible and respected the age and value of this medieval panel, was sufficient in improving readability and returning the panel to a state closer to that in which it was originally intended to be seen. Furthermore, the structural integrity of the panel was greatly improved with a stronger frame support so that the panel could be displayed safely. The panel can now be viewed in the Medieval Galleries at Worcester Art Museum.

Thank you to Curator of Arms & Armor and Medieval at Worcester Art Museum, Jeffrey Forgeng, and to Worcester Art Museum Chief Conservator and Objects Conservator, Rita Albertson and Paula Artal-Isbrand respectively, for entrusting me with the treatment of this wonderful piece. Special thanks to Ellen Shortell, Madeline Caviness, and Virginia Raguin for graciously sharing their time and connoisseurship of medieval stained glass and aiding in successfully clarifying the imagery. Additional thanks to Drew Anderson, Lisa Pilosi, Karen Stamm, and Janis Mandrus for their consultations and treatment advisements. Also, thank you to Preparator/Exhibitions Carpenter, Trevor Toney, for providing a strong support frame for the window so that it can be safely displayed. Lastly, thank you to the Andrew W. Mellon Foundation, Serpentino Stained Glass Studio, and the Worcester Center for Crafts for the funding and/or supplying of tools and materials for this project.