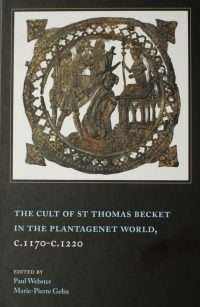 Nearly eight hundred and fifty years after the murder of Archbishop Thomas Becket in Canterbury Cathedral on December 29th, 1170, interest in this dramatic event and its consequences, remains undiminished (Fig. 2)

Within the last few years there have been excellent chapters about Becket in Rachel Koopmans splendid study of thirteenth-century miracle stories, ‘Wonderful to Relate’, see http://www.upenn.edu/pennpress/book/14797.html, (with a follow-up study about the Canterbury miracle windows expected shortly); Christopher de Hamel’s discovery of a book used by Becket (https://www.theguardian.com/books/2016/oct/01/thomas-beckets-personal-book-of-psalms-found-in-cambridge-library) and the unveiling of a wall painting depicting his murder in Spain (http://news.bbc.co.uk/1/hi/world/europe/8029320.stm).

This new addition to the literature adds yet another layer to the story: the impact of the killing and the subsequent development of the Becket cult in the fifty years after the murder. It is a useful addition to the genre and also includes a chapter of particular interest to Vidimus readers, centring on some unusual depictions of the martyred saint’s story in the stained glass windows of two French cathedrals. There is also much of interest to a wide variety of historians and a valuable comprehensive bibliography.

The book begins with a historiography of the Becket cult by Paul Webster which follows its beginnings in the wake of the murder to modern plays and film adaptations of the story.

The next chapter by Anne Duggan traces the development of the cult of St Thomas and discusses whether Henry II’s famous penance in 1174 was primarily a clever ‘damage limitation’ exercise or an act of genuine remorse. Marie-Pierre Gelin, a past Vidimus contributor, (see Vidimus 14) catalogues how the monks at Canterbury used Becket’s canonisation to re-invigorate and promote the cults of two earlier Archbishops, the Anglo-Saxon saints Dunstan and Alphege, even to the extent of commissioning stained glass windows commemorating their lives (a few of which survive, see North Quire Aisle Gallery, Nt IX) (Fig. 3).

Elma Brenner looks at the growth of leper hospitals in Normandy dedicated to St Thomas following Becket’s canonisation in 1173. Michael Staunton details how contemporary chroniclers recorded and interpreted the murder both at the time and during later crises. Two related chapters by Colette Bowie and José Manual Cerda discuss whether /how Henry’s daughters, Matilda who married Henry the Lion, Duke of Saxony in 1168, and Leonora who married Alfonso VIII of Castille in 1170 furthered the cult of St Thomas in their new homelands. The evidence is stronger for Matilda than Leonora with the inclusion of Becket’s image in the Gospels book for Henry the Lion made at Helmarshausen abbey between 1176 and 1188 attributed in part to her influence (Fig. 4).

In both cases the authors point to a theme which resurfaces in several other contributions, the way in which a murder which came close to destroying the reputation of Henry and England was appropriated by the Plantagenet’s and promoted as if Thomas was an ally rather than a foe. One example was that when Henry III presided over the important translation of Beckets relics from the Crypt of Canterbury cathedral to a shrine in the newly built Trinity Chapel in 1220 the ceremony was timed to co-incide with an anniversary of Henry II’s death. 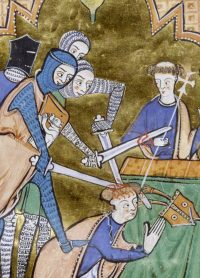 Fig. 2. The Murder of Thomas Becket, from an illuminated manuscript of c.1260, The Carrow Hours, Walters Art Museum, USA. 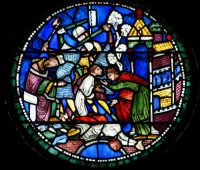 A second chapter by Paul Webster considers the ways that the memory and status of Becket as a martyr who died protecting the rights and independence of the church from the state resurfaced during the clash between Henry’s youngest son, John I (b. 1166; reigned 1199-1216) and Pope Innocent III, following John’s refusal to accept Rome’s appointment of Stephen Langton as Archbishop of Canterbury.

The final chapter of the book by USA CVMA Committee member, Alyce A. Jordan, is of special interest to stained glass historians. In the aftermath of Becket’s murder his images appeared in art such as sculpture, manuscripts, wall paintings and stained glass. Among the latter were windows in four French cathedrals dating from around 1220; Sens, Chartres, Angers and Coutances. The first two named had links to Becket during his lifetime and were within the Capetian kingdom of France. They depicted him as an exemplary priest caring for his ‘flock’ (celebrating Mass, confirming children, preaching) and as a martyr for the church, contrasting the piety of the French king who had protected Becket during his exile with the despotic actions of Henry II.

The windows at Coutances and Angers, however, were different both in imagery and tone from the preceding pair and Jordan explores these differences in terms of politics and family ties.

At Coutances the window was of one of three in the north transept devoted to saints and their stories; the others being St George and St Blaise. In the fourteenth-century changes to the building saw the height of the original window reduced and the panels rearranged. Six scenes from the original scheme survive and show Becket conversing with Henry II; Becket returning to England by boat after ending his exile in France (the ‘regressio’); Becket kneeling before Pope Alexander III; Becket’s murder; his entombment; and finally, the elevation of his soul to heaven. According to Jordan the image of Henry II in the first scene is far more benign than in the equivalent portrayals at Sens and Chartres where he is shown as an evil king. At Coutances Henry is shown without a sword and Becket inclines his head towards the king and seems to raise his hand as if giving a blessing.

Jordan explains the differences by describing some of the political tensions in Normandy around 1220. At the time of the murder the Duchy had been part of Henry II’s Angevin empire. By 1220, however, it had been conquered by France and sporadic local uprisings had followed. The author suggests that attitudes to England may have been ambiguous. The church was loyal to its new king but also tied to memories of England. The association of Becket with St George may also have been deliberate. Although not yet the patron saint of England, he clearly had a following in the Anglo-Norman church and aristocracy as the wall painting of c.1120 at Hardham church (West Sussex) testifies.

The Angers window is discussed more extensively. It retains five of its original eight panels and has the heraldic blazon of the Beaumont family in its borders. It can be seen here:

(If possible this page should be kept open for cross referencing.)

Two of the five scenes at Angers mirror those at Coutances – Becket conversing with Henry II before returning to England and the archbishop’s entombment after his murder. The iconography of the other panels, however, is very unusual. According to the author, the first of these exceptions shows either the coronation of Henry’s fifteen-year old son and namesake, at York in 1170 (the event which triggered Becket’s excommunication of the three bishops for usurping Canterbury’s prerogative and which, in turn, precipitated Henry’s outburst against him ) or the young king’s refusal to meet Becket after his return from exile. But in passing it should be noted that other scholars, such as Stuart Watling, interpret the scene differently, suggesting that it depicts Louis’ diplomatic efforts to effect a reconciliation between the English king and his archbishop – see also the version of this scene at Sens.

The remaining two panels focus on Becket’s murderers, Reginald FitzUrse, Hugh de Morville, William de Tracy and Richard le Breton, who are shown first setting out on horseback from the king’s court at Bures in France to confront Becket and second crossing the English channel by boat on their way to Canterbury. 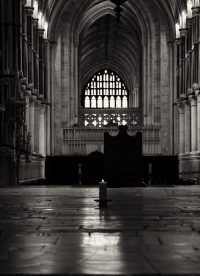 For Jordan these scenes raise several questions. The first is why so much emphasis is placed on these four individuals in terms of the overall balance of the window: two panels or one quarter of the entire scheme. A second is less direct. Illustrated lives of Becket, such as the thirteenth-century ‘Becket Leaves’, now displayed in the British Library, include several scenes of Becket on horseback and a well-known image of him on board a sailing ship making the return voyage to England after his exile. Could the scenes of his four killers riding from Bures and subsequently shown on board a ship to England be a deliberate mimicry or parallel of these events?

Jordan argues that the disproportionate emphasis on the killers may reflect family ties and post-colonial tensions within the Beaumont family who commissioned the window.

Guillaume de Beaumont, bishop of Anjou, 1202 – 40, belonged to a prominent aristocratic family which had blood links to the Angevin dynasty and its allies. His own position as bishop owed much to Henry II’s successor John I. As at Coutances, Anjou was in shock after its conquest by France and the loss of its historic ties to England. Moreover, Henry had arranged for one of Guillaume’s sisters, Ermengarde, to marry William I, the Lion, king of Scotland (b. 1143; reigned 1165 – 1214) who had subsequently supported the Great Rebellion led by his sons against Henry II. After his capture in 1174, William had been taken to France and held prisoner at Falaise where he eventually signed the so-called Treaty of Falaise, recognising Henry as his feudal superior. After his release in 1178, he founded Arbroath abbey in Scotland in honour of St Thomas Becket and was buried there in 1214.

Nor were these the only ties. Some of the assassins were related to, or associates of, the Beaumont family. Hugh de Morville was the brother of William I’s constable. Robert FitzUrse was probably a blood relation, William de Tracy held extensive lands in Maine where Guillaume’s brother-in-law as count.

Could the windows be a form of penance for the killers or, as Jordan hints, a familial declaration of the kind better known to modern audiences – fame by shame?

Certainly the reader will have much to consider (Fig. 5).