As part of a new exhibition at Battle Abbey three replica medieval window panels have been produced for display. Two are reproductions of a surviving panel depicting the Battle Abbey coat of arms. The other is a grisaille panel produced in partnership by English Heritage and Canterbury Cathedral Studios, based on an examination of surviving archaeological fragments from the Chapter House.

Battle Abbey and the new exhibition

Battle Abbey in East Sussex was founded in about 1071 by William the Conqueror to commemorate and atone for his victory at the Battle of Hastings in 1066. As a royal foundation the Abbey was unusual in being independent of other monasteries and ecclesiastical authorities. It was also one of the richest religious houses in England and a highly visible symbol of the piety, power and authority of the Norman rulers. By the time of its suppression in 1538 the Abbey owned property in seven counties and had a gross income of £987.

Visitors to Battle Abbey are typically drawn by the fame of 1066 and can find the medieval history of the site difficult to interpret as little of the great Benedictine monastery remains. The new exhibition which opened in April of this year hopes to redress the balance and highlight the cultural wealth of the abbey. Surviving stonework and archaeological finds have been re-examined and are displayed alongside replicas and artists impressions in an attempt to communicate some of the grandeur that was destroyed in 1538.

The only panel of medieval window glass which survives from Battle Abbey is a fourteenth-century coat of arms now on permanent display in the Burrell Collection (number 45.120) (Fig. 1).

There is no evidence for the original location of this piece. For the purposes of display English Heritage commissioned two copies to be mounted in the window of the Abbey’s gatehouse, as part of the representation of the room for its original purpose as an exchequer (Fig. 2, 3). 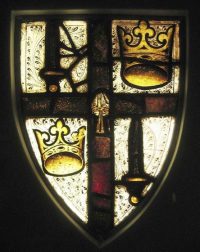 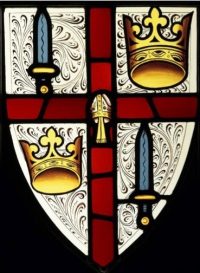 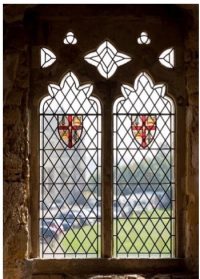 The panels were painted by Alison Eaton ACR. A particular challenge for Alison was the recreation of the damast (floral pattern) in the Argent ground of the shield. It proved impossible to replicate the instrument which must have been used to create the long sweeps that start with a thin even line and terminate in a broad chisel shape. Researchers at Canterbury Cathedral Studios tried different brushes, and even made brushes from the flights of feathers. The medieval painter probably used a scribe’s quill, but Alison found a modern metal nib to give the control she needed. The original damast was done in a very dynamic style, fast and off the cuff, so ultimately Alison opted for a similar approach. It may not be slavishly precise, but it avoids the dreaded forger’s tremor.

Creating the reproduction highlighted certain interesting aspects of the original. For instance, the Canterbury team noticed that the upper part of the upper crown is a replacement, but since it isn’t a bad one they just eliminated the repair lead. More puzzlingly the mitre at the centre of the cross has an unusual element that looks like a secondary half-border or ribbon segment. They asked Canterbury Cathedral’s vesturer for help, but he could not identify the element and could not make sense of it. They found no other depictions of a 15th-century bishop’s mitre that shows this element so the decision was made not to copy it.

All the other surviving pieces of decorative glass from Battle Abbey were discovered during excavations that took place between 1978 and 1980 under archaeologist J.N. Hare. Much of the surviving glass was found in the Chapter House and probably came from the windows of that building. The report on the glass was undertaken by Jill Kerr who concluded that although the glass was extremely fragmentary and heavily degraded it “represents a considerable extension of our knowledge of the repertoire of geometric grisaille motifs in the thirteenth century”.

The previous site museum simply displayed the larger fragments of archaeological glass without conveying to visitors how a complete grisaille window would have appeared. For the new exhibit English Heritage wanted to reconstruct a design based on the surviving fragments within which they could be displayed. 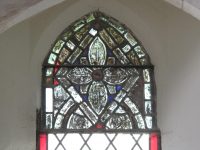 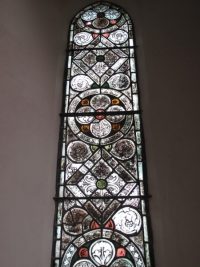 An initial examination of the surviving glass by curators Kathryn Bedford and Rowena Willard-Wright highlighted three designs that appeared with particular frequency: a border of quatrefoil flowers with a central circle and crescents within the petals; a stiff leaf foliage spray that appeared to be the apex of a vesica and possibly to terminate in a multiple foil design found on separate fragments; and a simple beaded border on blue coloured glass. These then formed the focus for research looking at contemporary extant windows for parallels which could be used as the basis for a reconstruction.

These windows do not provide direct equivalents to the three most prevalent Battle designs; however, the similarities in artistic vision in terms of both painting style and design structure between the sites were striking. The use of wide colourless, patterned borders around a central pattern that includes petal shapes virtually identical to those at Battle provided a structure for an initial, partial reconstruction. 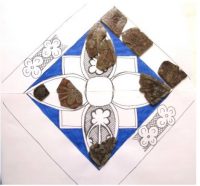 Fig. 6. Kathryn’s original reconstruction sketch with some of the archaeological glass

Following her own examination of the glass, Leonie Seliger expanded and adjusted Kathryn’s initial sketch (fig. 6).

She confirmed the artistic similarities between the two sites and identified additional surviving fragments from Battle that could fit into the pattern. Leonie then made precise outline drawings of the fragments to have their actual size and shape, suggested colours to appear in the reconstruction based on survivals that the two sites and made a hypothetical reconstruction of a grisaille pattern (Fig. 7, 8, 9, 10).

The project team behind the exhibition were so pleased with the reconstructed design that the decision was made to commission a replica panel for display. 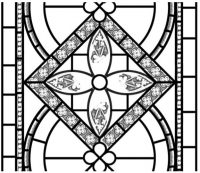 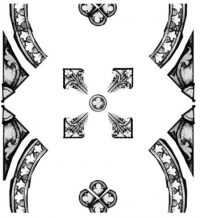 Fig. 8. Additions from the Stodmarsh window 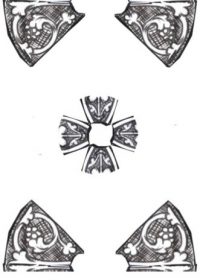 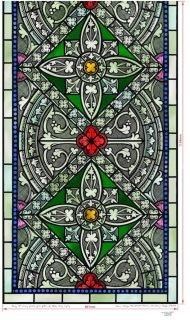 The panel was made by Sofia Villamarin. Since the archaeological fragments from Battle Abbey are far too corroded to show any colour in transmitted light, she used a large collection of grisaille fragments of a similar date from Westminster Abbey to select a colour palette. She used three or four different pale green tones (fig.11), which – together with the variations in colour density caused by the uneven thickness of the mouthblown glass – produced a lovely mother-of-pearl-like effect, similar to what you see in Stodmarsh Church. 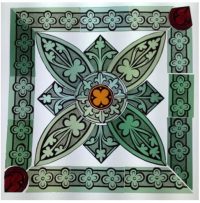 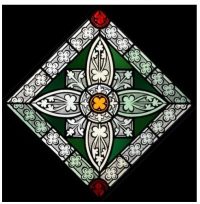 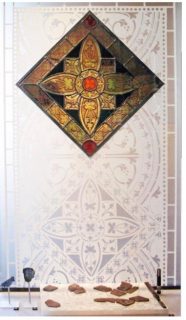 Fig. 13. The grisaille replica on display

The complete reconstructed design was printed in white onto a sheet of Perspex, with a void to receive the stained glass panel, and displayed in a case with the original fragments placed onto a copy of the design (Fig. 12, 13).